Rebels battle back with late goal, but fall to Blades in extra time 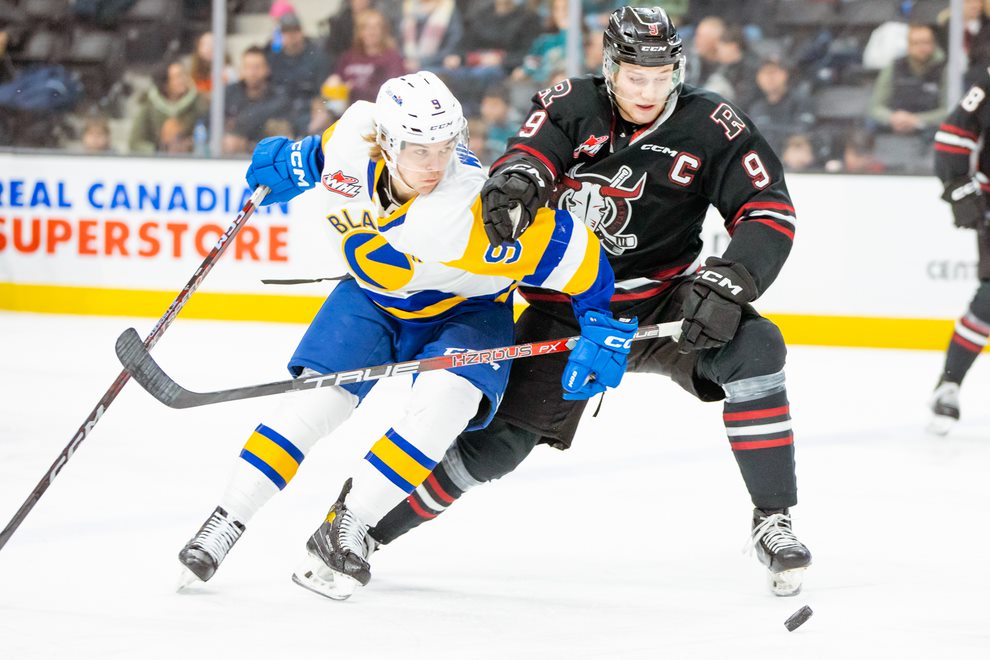 The Red Deer Rebels never-say-die attitude didn’t get them a WHL win Friday night at the Peavey Mart Centrium, but it did earn them a single point.

Down 3-2 to the Saskatoon Blades, the Rebels got a power play goal from Mats Lindgren with 9.1 seconds remaining, then dropped a 4-3 overtime decision in front of 3,381 vastly entertained fans.

“Whatever it takes to win, that’s what we’re going to do to win a hockey game.”

On this night, the Rebels came up just short of that goal, but at least were the recipients of a well-earned point after battling back from a one-goal deficit on three occasions.

The visitors set the pace in the first period and despite outshooting their hosts 13-8 the scoring chances were basically even.

The Blades got the lone goal of the opening frame when Jayden Wiens moved into the low slot and converted a nifty corner pass from Tyler Parr.

“They’re a fast team,” said Rebels assistant coach Ryan Colville. “It took us a little while to adjust to their speed, but once we got going it was a pretty good game, back and forth with two good teams playing each other.

“I would have liked a better start from our group, but once we go going we responded well.”

The Rebels were the better team in the second period and were rewarded at the 6:44 mark when Jhett Larson redirected a shot from defenceman Matteo Fabrizi, who had taken a corner feed from Ollie Josephson.

Saskatoon restored its lead late in the period as Trevor Wong notched a goal similar to Wiens’ marker — with Brandon Lisowsky getting the assist — but Lind pulled the Rebels even once again with a power play tally near the midway point of the third period.

Jayden Grubbe accepted a pass from Christoffer Sedoff with the Rebels on the power play and sent the puck down low to Lind, who slipped the puck through the pads of goaltender Ethan Chadwick.

But the Rebels answered again with a power play of their own and netminder Kyle Kelsey on the bench. Lindgren moved down into the low slot and beat Chadwick to the top of the net with the clock winding down. 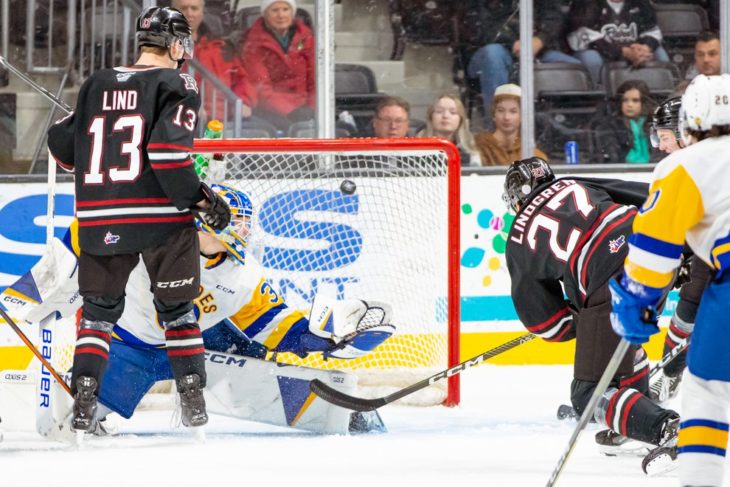 “Just the resiliency of the group . . . with them getting the power play goal on the double minor and us able to respond with that late goal, it showed the character of the group,” said Colville.

The Blades got the last laugh however when Lisowsky scored from the high slot at 3:53 of the extra frame.

“We score with 10 seconds left and then you never know what’s going to happen in overtime. It’s anyone’s game,” said Lind.

The Blades presented themselves as a quick, talented crew while posting their 18th win of the season — matching the Rebels in that department — and moving to within four points of second place Red Deer in the Eastern Conference with three games in hand.

“They have a really good team, obviously,” said Lind. “They beat Winnipeg (conference leading Ice) last weekend so you know they’re a good team coming in here with lots of confidence.

“We came out slow to start but once we found our game we were right there with them. It was a good game right to the end.”

Chadwick made 21 saves while posting his ninth win of the season. Kelsey was at least as sharp in the Rebels net, turning aside 26 shots.

“He was good again,” said Colville. “He got us to overtime and gave us a chance to win.”

The Rebels are back in action Saturday against the visiting Moose Jaw Warriors.

Notable: The Rebels were two-for-four on the power play, the Blades one-for-five . . . Grubbe picked up a pair of assists to give him 29 points (6g,23a) on the season . . . The three stars: (1) Rebels forward Kai Uchacz, (2) Wong and (3) Lind . . . Prior to the game, Uchacz was presented with the Mitchell and Jewell Red Deer player of the month award for November.