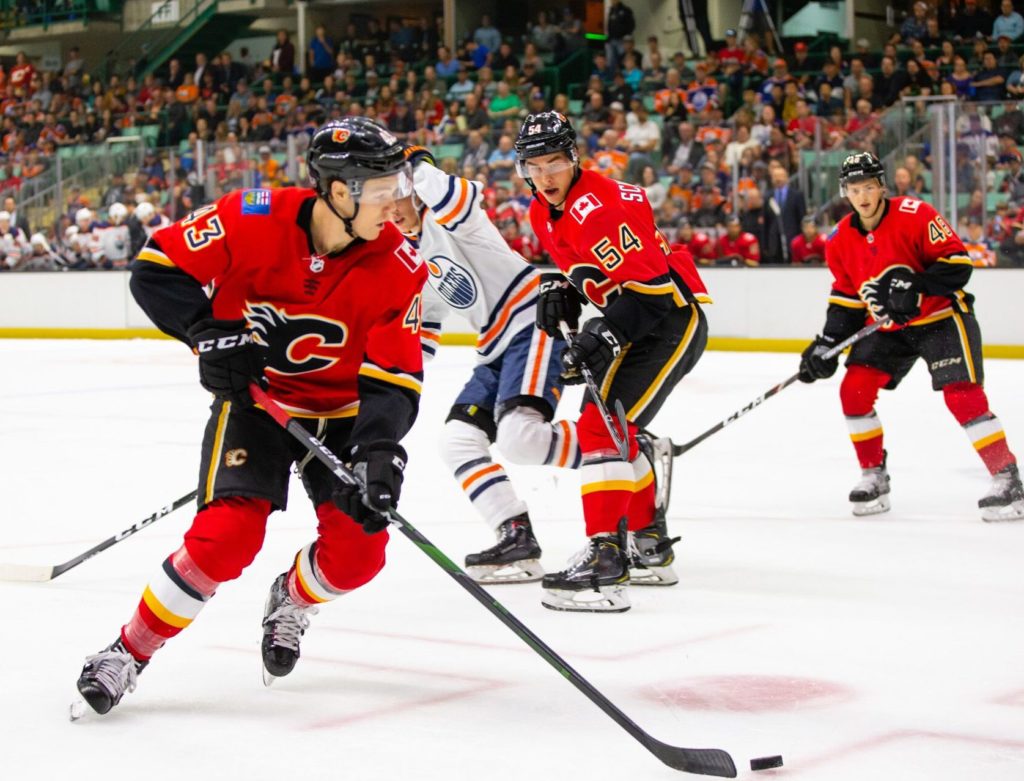 As a youngster growing up in Red Deer, Andrew Nielsen was adamant as to which side he was on in the NHL version of the Battle of Alberta.

“Definitely the ‘C’, I wouldn’t go anywhere near an Oilers jersey,” the defenceman said Saturday following the Flames-Edmonton Oilers rookie game at the Centrium in which he played a regular shift in Calgary colours.

“My uncle tried to get me into I think it was a Mike Comrie jersey when I was like six or seven. I didn’t even take a sniff at it.

“I looked up to (former Rebels rearguard) Dion Phaneuf when he got drafted (to Calgary) from here and that made the bond with the Flames even stronger.”

Nielsen turned in two solid WHL seasons with the Lethbridge Hurricanes starting in 2014. He was selected by the Toronto Maple Leafs in the third round of the 2015 NHL entry draft and went on to post 18 goals and 70 points in his second and final season with the ‘Canes.

He carried that offensive touch to the Leafs’ AHL affiliate Toronto Marlies, collecting 39 points in 2016-17 and 26 the following season. Nielsen was eight games into the 2018-19 AHL campaign when he was dealt to Calgary.

“I was definitely excited when I found out I was traded to Calgary. It was definitely a dream come true,” said the six-foot-four, 227-pound Nielsen, who utilized his size in both the WHL (122 minutes in penalties in 2015-16) and AHL.

Following last year’s trade, Nielsen, 22, spent the remainder of the season with Calgary’s AHL team, the Stockton Heat. He took special delight in playing in a Flames jersey for the first time Saturday.

“I got off the bus and went right to the main room to get my jersey tonight,” he said. “I saw my name on it and kind of had a moment to myself. It was pretty surreal, a good feeling.”

Nielsen admitted to harbouring a least a slight case of the butterflies while skating in his hometown for the first time as a pro.

“It was pretty cool. I’ve marked it for awhile,” he said. “I was a little nervous, a little anxious, to come out and play in front of everybody, but it was fun. I had 50 to 60 supporters here tonight. It was a good thing I didn’t have to pay for tickets.

“It was my first time pulling on a Flames jersey so that was pretty cool for me. All in all I had a good experience and had fun and we got the win.”

The Centrium audience of roughly 5,800 took in an entertaining yet offensively-starved contest that ended 1-0 for Calgary on an overtime goal by Matthew Phillips.

Despite the fact neither team was able to score in regulation time, the fans loudly voiced their divided support.

“You’re in the middle of both cities so you’re going to get a mix (of fan support). While growing up here and coming to games like this . . . there’s always going to be a crowd for both teams,” said Nielsen.

“It was my first experience with the Battle of Alberta so it was pretty cool to be part of. Hopefully I can be a part of a real one soon.”

Nielsen refused to predict his chances of earning a roster spot with the Flames later this fall. He did insist, however, that he’ll be willing to fulfil any chore if he gets the chance. 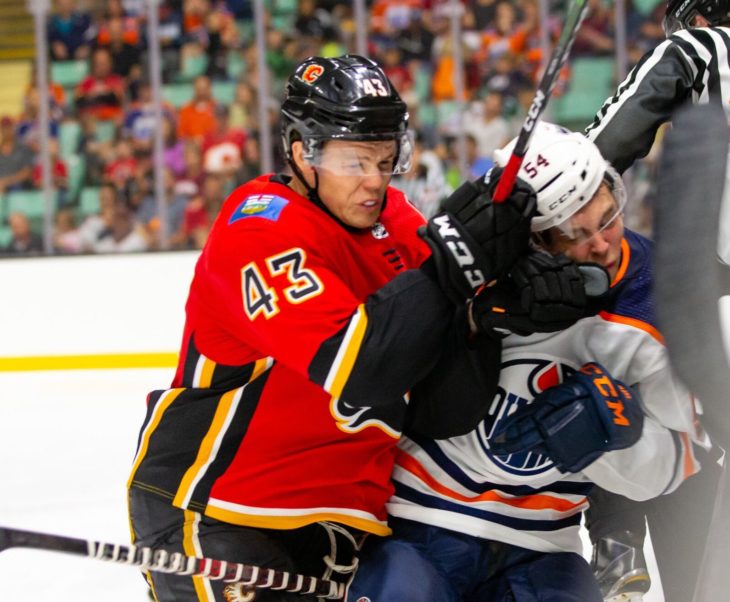 “That kind of stuff is out of my control. I’m just going to play my game and hopefully deserve at least an opportunity,” he said. “I’m going to go and show that I can play both ends of the ice, defend well and contribute offensively.

“Anything I can do to help, whether I have to block shots or fight or kill penalties or score goals, I don’t care. I will try and contribute and get in on the play as much as I can.”

In order to give himself at least a fighting chance of earning NHL employment, Nielsen will have to improve on his 2018-19 season.

“It wasn’t good, I didn’t have a good year at all,” said Nielsen, who tallied four assists and racked up 56 minutes in penalties in 29 games with Stockton.

“I didn’t feel that I adapted well to the Western Conference kind of game in the American League.

“I hadn’t played in awhile coming from Toronto. It took me awhile to get going. I didn’t find my stride. I really dialled it in this summer to make sure I’m ready to go this season. I feel probably the best I have in two years going into camp.”