Players, coaches feeding off each other: Shaun Sutter 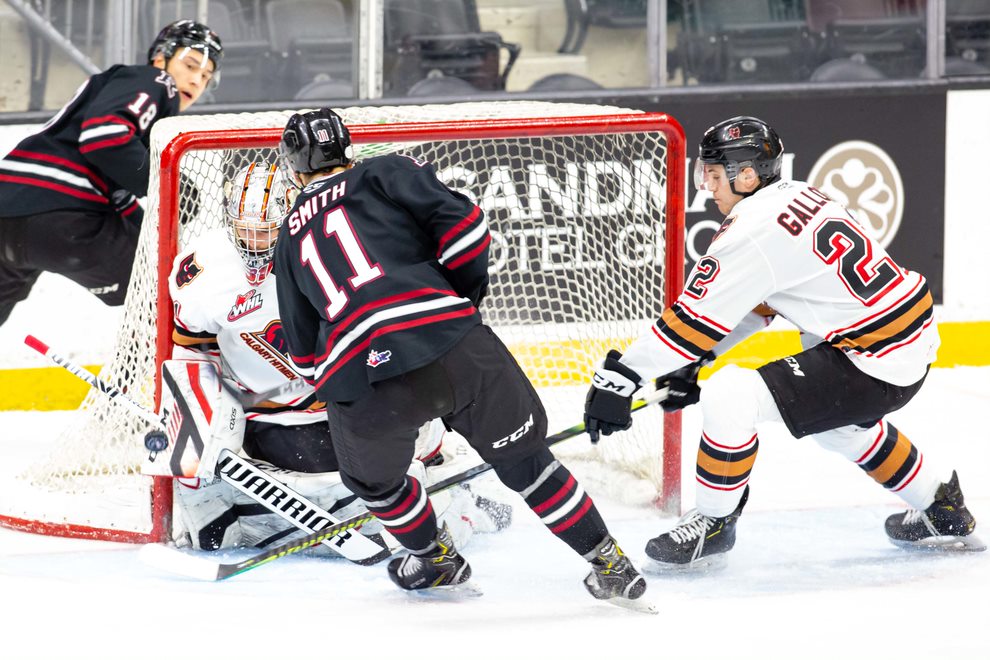 Shaun Sutter has found coaching the Red Deer Rebels to be a two-way street.

“I didn’t envision this happening, but for myself I’ve had a lot of fun with the kids trying to create a new energy for them,” said Shaun Sutter, the Rebels assistant GM whose previous WHL coaching experience was as an assistant with the Regina Pats for two seasons, from 2009 to 2011.

“Just trying to bring a different voice. No one is going to replace Brent but it’s the type of thing where he said to bring some energy with a different voice. I’m trying to do that and I’ve fed off the kids. It’s brought a lot of energy for me. We feed off of each other — the coaching staff feeds off the players and the player off of us.

“It’s been a lot of fun. We haven’t had the results we’ve wanted but a lot of the kids have been engaged and we’ve been right there going into the third periods.”

The inability or refusal to play a solid 60 minutes has been a problem for Red Deer in this abbreviated season, including in two of its last three games, all versus the Medicine Hat Tigers.

The Rebels struggled in the final frame of each of the first two contests, allowing three unanswered third-period goals in 5-2 and 4-2 losses before falling 3-2 in the final game when each team scored once in the third.

Currently mired in a 12-game losing steak — their last win was on March 14 — the Rebels have four games remaining in what will be a 23-game season for the club.

Red Deer will host the Calgary Hitmen on Thursday before closing out their season with a home game against Edmonton on Saturday, a visit to Calgary the following day and another match with the Hitmen the following Tuesday at the Centrium.

“The big thing is that we’ve been stressing that we want to finish how we want to start for all the kids,” said Sutter. “It’s obviously been a different year with everything, including a lot of injuries.

“Over the last couple of weeks we didn’t know how the players were going to respond after we made the change. We’ve kind of been right there. It’s just a matter of seeing it through in the third periods and the last game in Medicine Hat was probably the best third period we’ve had in a long time.

“Now, internally, I think they’re starting to see some things as a group in regards to pushing each other. You want them to be rewarded for their effort but there’s also the matter of still learning how to put it all together.”

Meanwhile, the Rebels still have five players on the injury list, including veteran forward Josh Tarzwell (lower body, day-to-day), who remains the only one of the five who could possibly return before the season ends.

Three of the players — defencemen Trey Patterson, Chase Leslie and Hunter Mayo — have all returned home while center Jayden Grubbe has remained with the team while rehabbing a lower body injury that required surgery in late March.

° On another note, Sutter says he has stayed in contact with the two Minnesota forwards — Gracyn Sawchyn and Aidan Willis — the Rebels selected in a special U.S. prospects draft in March of last year.

Sawchyn, currently competing in the U.S. Nationals in St. Louis, suited up with the Shattuck St. Mary’s U16 AAA team during the 2020-21 season, scoring 13 goals and collecting 58 points in 44 games.

Willis split the season between two teams, scoring 14 times and recording 35 points in 20 games with the Blue Army U15 AAA squad and putting up 24 points (4g,20a) in 22 outings with the Lakeville South team that lost in the Minnesota high school finals.

Sutter remains hopeful that either or both of the players will attend the Rebels training camp next fall, assuming the team is allowed to start on time.

“They both have interest in playing in Red Deer, but they also have all the other options that exist,” said Sutter, in reference to the U.S. National program, which Sawchyn has a solid chance to be involved with, plus the USHL.

“We’re hoping they’ll have the opportunity to come to Red Deer and see everything. In a normal year they would have already been to one of our camps. That’s kind of been the problem — we can’t even get them here.”

The Rebels have signed their first four picks in the 2020 WHL bantam draft — forwards Kalan Lind, who is with the team now, Talon Brigley and six-foot-two Arjun Bawa, and six-foot-four, 229-pound defenceman Mario Fabrizi.