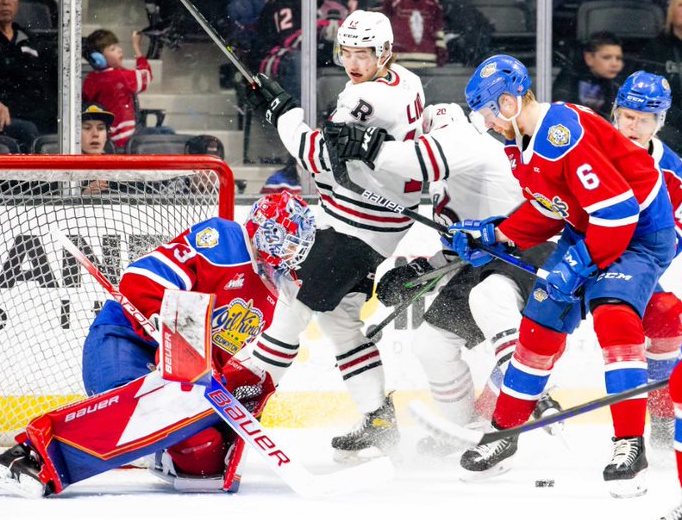 The Red Deer Rebels’ WHL season came to a conclusion Wednesday at the Peavey Mart Centrium with a 4-2 loss to the Edmonton Oil Kings, who swept the best-of-seven Eastern Conference semifinal.

The Rebels were, for the most part, no match for a stacked Edmonton squad that is built to win now, a team with a roster full of future pros, including more than a few top flight NHL prospects.

And yet, Red Deer battled right to the bitter end in back-to-back games, including Monday’s 5-4 overtime loss.

The Oil Kings came in waves in the opening period. They were relentless in an attack that resulted in 23 shots.

The Rebels managed only six first-period shots on Edmonton netminder Sebastian Cossa and played most of the frame on their heels.

“The preparation (for the game) felt fine. When you’re with your team the entire year you can feel before the game starts whether they’re dialled in or not,” said Konowalchuk.

“They seemed ready, but watching warm up they looked a bit tentative. It was a brand new experience for a lot of guys, facing elimination.”

Despite carrying the play for the vast part of the first 20 minutes, the Oil Kings managed just a single goal when Jalen Luypen, alone in front, took a corner pass from Jaxsen Wiebe and fired a shot off the pad of netminder Connor Ungar that trickled over the line.

“The first period we played not to lose, and that wasn’t our intention,” said Konowalchuk. “We wanted to go out and play on our toes.

“But we weren’t skating. It doesn’t matter if you’re nervous, you have to go out there and trust your instincts. The first half of the game, that’s what it was — we weren’t skating not wanting to make a mistake.”

The second period wasn’t much better for the Rebels, who fell behind 3-0 before it was one minute old.

Dylan Guenther raced down the right side directly off the opening faceoff and beat Ungar with a rising rocket from the circle at the eight-second mark, and just 31 seconds later Carter Souch buried a nifty feed from Guenther.

The Rebels finally got on the board when Jhett Larson scored on a breakaway, placing a perfect shot over Cossa’s shoulder nearing the midway point of the period, but that’s as close as the home team would get.

Guenther potted a power-play goal late in the period to all but seal the deal despite more than 20 minutes still remaining in the contest. 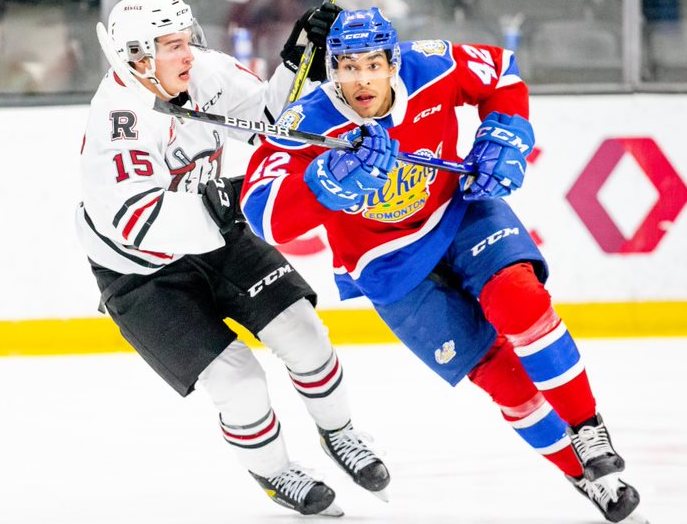 “They (Oil Kings) are a deep team and they can execute, and if you’re not skating it makes them better,” said Konowalchuk. “We’re at our best when we’re a skating team. The first half of the game we were thinking way too much, you have to skate while you think.

“If you’re standing around waiting for the game to come to you it’s a tough game, and I thought that’s what happened the first half.”

The Rebels closed out the scoring in the final period, short-handed to boot.

Jackson van de Leest forced a turnover at the Rebels blueline and raced off on a two-on-one with fellow defenceman Blake Gustafson, who hauled in a picture perfect pass and beat Cossa with a forehand-to-backhand offering.

It was the game’s prettiest goal, but it was too little, too late.

“It’s hard right now. We didn’t think, the coaching staff and players, the series would go like this. We’re all disappointed,” said Konowalchuk.

“Right now it hurts, but I think when we settle the emotions down we’ll realize there were a lot of players who accomplished some individual goals this year.”

At the top of that list was Arshdeep Bains and Ben King finishing the regular season as the league’s top two point producers. Bains won the Bob Clarke Trophy as the scoring champ with 112 points and King potted a league-best 52 goals.

The team, as a whole, enjoyed a solid season, winning 45 games before taking out the Brandon Wheat Kings in a thrilling six-game opening playoff series.

“As a team, an awful lot of good hockey was played for the most part of the year,” said the Rebels bench boss. “Against a real good team over there our wheels fell off more than what we’d like, but again that’s a real good team.

“We did a lot of good things this season. I’m really proud of our guys . . . proud of them all year. For me, it was a fun team to coach. I didn’t have to come to the rink and push guys. We had a real good group who wanted to get better, wanted to work. That’s all you can ask.

“We all want to win a championship but only one team gets to do it. But it was a great learning experience.”

Notable: Ungar turned in another stellar performance dating back to Game 3, making 47 saves to give his team a chance. Chase Coward, who got the start in each of the Rebels’ earlier eight post-season games before suffering an upper body injury, dressed as the back-up Wednesday after sitting out Game 3 in which Justen Maric served as the club’s second netminder . . . Little-used forward Josh Medernach also got into the lineup after Carter Anderson was an injury scratch . . . The Rebels were, however, missing top defenceman Christoffer Sedoff. A key point man on the team’s power play all season, Sedoff sat out Games 3 and 4 with an upper body injury and was sorely missed . . . The Rebels were zero-for-three on the power play, the Oil Kings one-for-six . . . Attendance was 3,344 . . . Red Deer’s graduating players — Bains, Liam Keeler and van de Leest — were recognized as the game’s three stars.