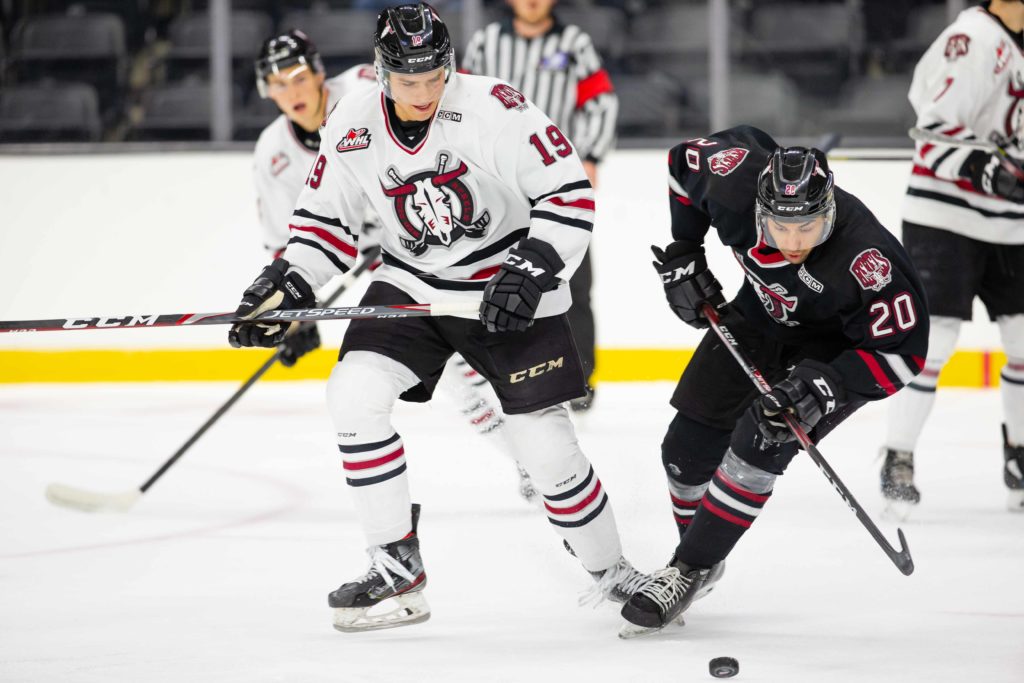 Everyone deserves a second chance and Kai Uchacz is making the most of his.

Removed from the Seattle Thunderbirds roster in March due to a racist incident, Uchacz was required to undergo further training and education on anti-racism and successfully completed the WHL diversity coaching program in June.

The Okotoks product, who has shown genuine remorse, will continue his diversity and respect training in Red Deer while helping the Rebels compete for a playoff berth and beyond during the upcoming WHL season.

Based on his play during training camp and Wednesday’s Black and White intrasquad game at the Peavey Mart Centrium, Uchacz (pictured above, in white) is a welcome addition to the team after being acquired from the T-Birds in July.

The 18-year-old winger potted four goals during training camp scrimmages and recorded a hat trick for Team White Wednesday in a 6-5 overtime loss to Team Black.

“I’m just getting back into it, getting my feet wet here in Red Deer,” he said. “It’s been awesome. Everyone around here has been great to me. All the guys treat me well here. Just getting back to playing hockey again is great.”

Uchacz had some obvious chemistry going with linemates Kalan Lind and Ben King as the line combined for eight points. Lind contributed three assist and King added a pair.

“Kinger and Linder were feeding me the puck well. Hopefully we can keep it together and keep the chemistry going,” said Uchacz.

The Rebels newcomer has looked right at home from the start of training camp.

“Camp went well, starting with the fitness testing and then right into practice and games,” he said. “It’s been pretty good so far. I’m enjoying it.”

The game wasn’t as well attended as some in the past, but still attracted several hundred spectators.

“Having fans in the building always helps,” said Uchacz. “It can be a great atmosphere here in Red Deer and it’s going to get better as we move along. My family came to the game today so it was good to play in front of them too.”

Meanwhile, the Team Black unit of Arshdeep Bains, Liam Keeler and centre Jayden Grubbe combined for 13 points in a winning cause.

“It thought it was a good, fast-paced game. Everyone has just got better each day through camp,” said Bains, who scored twice and picked up four helpers. “Finding that chemistry was pretty easy with these linemates.”

Grubbe, who scored twice and added two assists, was in complete agreement with Bains.

“We kind of read off each other really well and we’re able to use our speed off the rush,” he said. “We use our size down low and use our creativity to make plays.

“It’s been good being able to play with each other and we’re looking forward to the start of the season.” 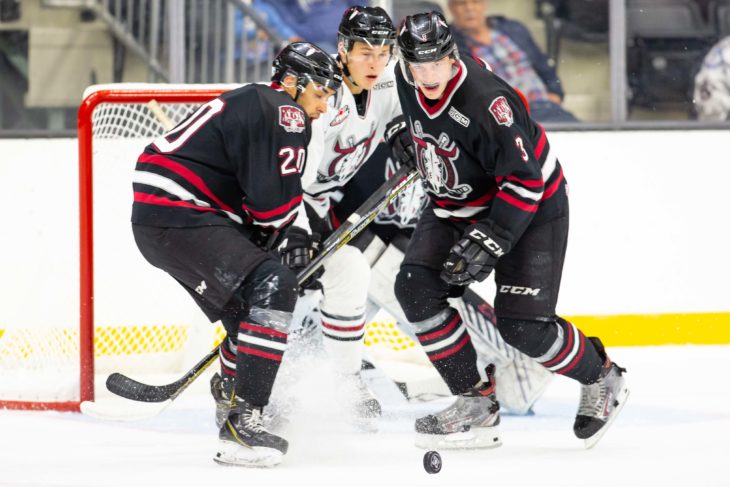 Grubbe, who will fly to New York Thursday morning to participate in the Rangers prospect camp, was impressed with the competitive drive on display in Wednesday’s contest.

“Everyone was leaving it out there. It was the last game for some of the younger guys who will be going home soon,” said the Rebels captain, the first player selected in the third round of the NHL draft in July.

“And the returning players are fighting for minutes in the lineup. Everyone had something to prove.”

“It was good, fun to watch for me and the fans,” said Rebels head coach Steve Konowalchuk. “There was some nice skill out there, some nice shots and some nice plays.

“At times there was some good compete with our veteran players and as camp progresses that’s what you like to see. You want natural compete in players and early on in camp that can be hard for teammates to do that. But when you get out there there’s one puck and you want that puck.

“It was nice to see the teams going back and forth and playing for a win.”

While the game’s top two lines looked more than impressive Wednesday, Konowalchuk said time will tell if they’re kept together.

“It’s early but there are options which you like to see,” he stated. “We have some pretty good depth and lines might be interchangeable.

“If we find a line that just clicks and works that would be a great scenario too if we don’t have to touch it. Their play will dictate that.”

Jace Weir, who also had an assist, scored the winner for Team Black 3:05 into the three-on-three overtime period. Keeler also scored once and added three assists.

Team Black starting netminder Chase Coward turned aside 17 of the 19 shots he faced before being replaced by Merik Erickson, who stopped seven of 10.

For Team White, Connor Ungar made nine saves on 12 shots and Jack Thomson turned aside four of seven.

The Rebels open their five-game exhibition season Saturday in Edmonton.