Defensive game for Masters a ‘positive work in progress’ 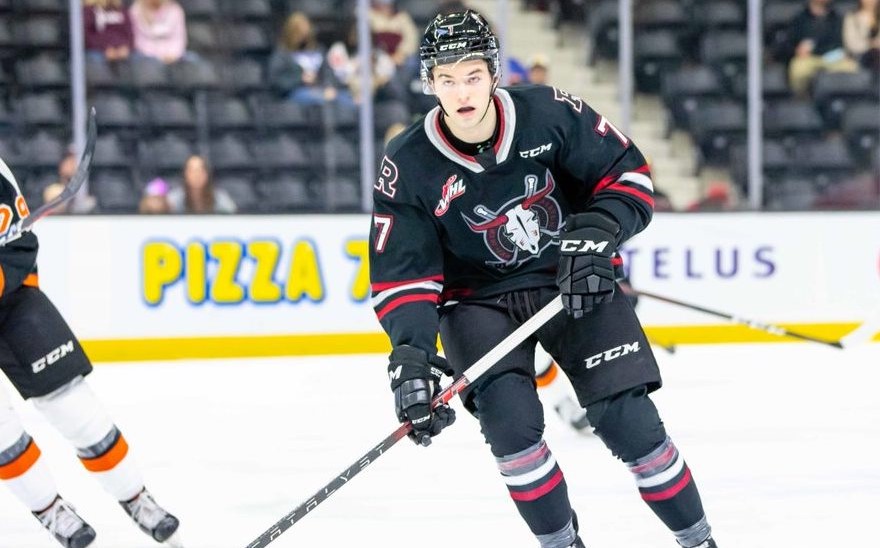 Kyle Masters has seemingly always carried the tag of an offence-first defenceman, but there are signs that may be changing.

Through eight games of the WHL season, the multi-talented third-year Red Deer Rebels rearguard and Minnesota Wild prospect is a plus-five in the plus/minus category despite having yet to register a point.

“He’s obviously a young player who’s learning the ins and out of being a defenceman,” said Egener, who handles the Rebels blueline corps. “You hear lots about D and goalies taking longer to develop and we see a guy who has positive offensive upside but a kid too that we’re trying to show the other side of the game.

“In order to play at the next level you have to be good on the defensive side.”

“I think we need to give Kyle a bit of credit,” said Egener. “His defensive game is not yet at the level where we envision him being at the end of the year, but it’s headed in a positive direction I think. We see it with video that we watch and obviously in the games. There is more engagement with players off the rush, there’s better engagement in front of the net and in the corners too.”

Masters is building off the experience of attending the Wild prospects and main camps in September after being selected in the fourth round of the NHL entry draft in July.

“It was definitely a humbling experience. Obviously you get to see what a true professional does in his everyday life,” said the Edmonton native. “Being there will help me moving forward, through this season and the next coming years.”

Attending the Minnesota rookie camp was a thrill in itself for the Rebels’ first-round pick, 16th overall, in the 2018 WHL bantam draft. But being promoted to main camp was extra enjoyable.

“I got to hang out with the big boys a little bit,” he said. “It was definitely cool. I was fortunate enough to be able to skate with guys like (Jared) Spurgeon and (Matt) Dumba, plus they signed Alex Goligoski. Those are three very mature guys. Hanging around with them and kind of learning from them was definitely great for me.”

Upon his return to Red Deer, Wild coaches had some words of advice for the five-foot-11, 172-pound blueliner. 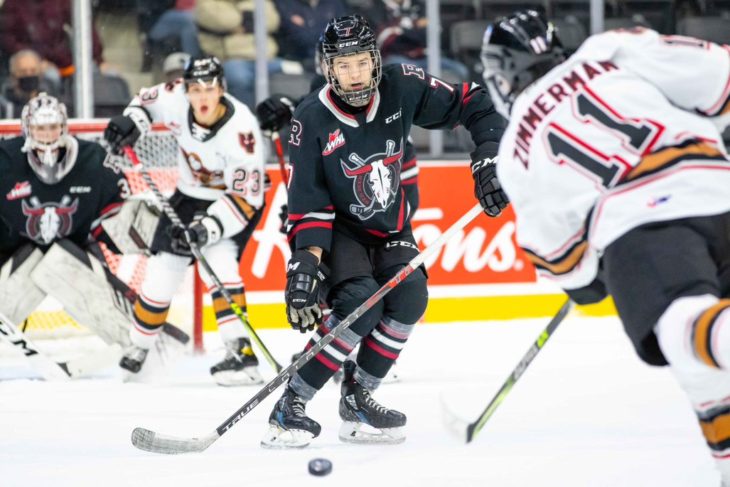 “Just get stronger, I think they tell every 18-year-old that. It’s part of growing up, you have to get stronger,” he said. “I really took that to heart and I’m doing anything I can to do as they ask.

“Hopefully I can gain a few more pounds before I go back there.”

Masters is not concerned with the fact he has yet to pick up a point this season while fellow defencemen Christoffer Sedoff (1-6) and Jace Weir (2-4) have garnered seven and six points respectively, for example.

Both Sedoff and Weir, it must be noted, have seen extensive power play time. Masters has also been used on the power play, sometimes in different spots.

“We’re tinkering around with him a bit. The last game we actually had him in front of the net. Before we had him in another role on the power play,” said Egener. “Sometimes when it’s not going the way you want it do you kind of tinker around a bit with things.”

Regardless, Masters is confident the points will come.

“I don’t really think of that. I’m really excited for the team and I think obviously when a team has success you’re bound to have individual success,” he said.

“Just a little snake-bitten right now, I guess. All I need is one off the butt and everything is going to start rolling for me.

“I think it’s just a learning experience. Everyone goes through stuff like this so it’s kind of something you take in stride and try to get through it. Obviously it’s going to come.”

The Rebels have shown shades of inconsistency early in the season with a 4-3-1-0 record, but on a heavily positive side two of Red Deer’s victories have come at the expense of the highly rated Edmonton Oil Kings.

“I think it’s super exciting,” Masters said of the Rebels’ potential to be a top club this season. “I think every guy in the locker room is super excited to see what’s going to unfold here.

“Obviously there are growing pains at the start of the year and the first team to come out of those growing pains comes out on top. With the help of the coaching staff we’re going to hopefully come out on top once everything kind of unfolds.”

The Rebels return to action Friday versus the visiting Lethbridge Hurricanes. The Brandon Wheat Kings will visit the Peavey Mart Centrium Saturday.

Notable: Two Rebels, Weir and forward Kai Uchacz, are among 45 WHL players on the Central Scouting Players to Watch list for the 2022 NHL entry draft. Both are ‘C’ prospects, projected as fourth- to sixth-round picks . . . The WHL Cup, featuring players from the four western provinces eligible for the 2021 WHL bantam draft to be conducted in December, starts Wednesday at the Centrium. BC will face Saskatchewan in the tournament opener at 4 p.m. Alberta will take on Manitoba at 7 p.m. Three Central Albertans, defenceman Keith McInnis of Red Deer and forwards Caleb Hadland of Sylvan Lake Cody Pighin from Alix, are on the Team Alberta roster. The WHL Cup will conclude Sunday with the bronze-medal game at 10 a.m. and the gold-medal contest at 1 p.m.