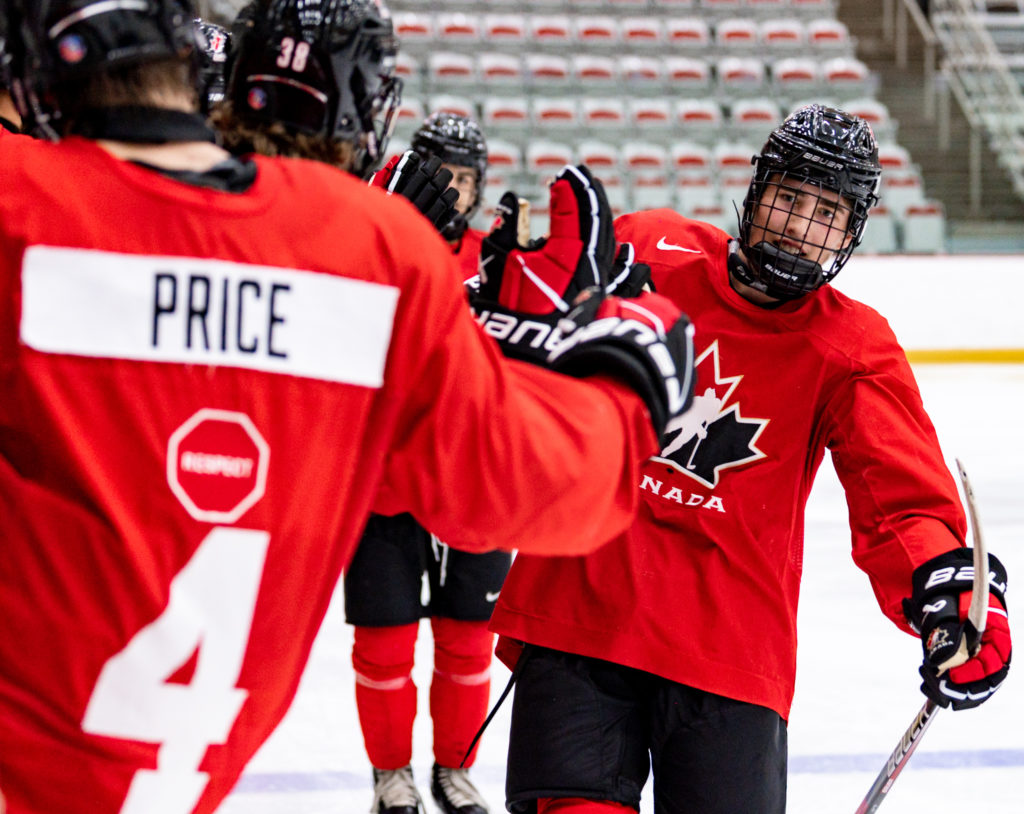 Lind showed his Canadian U18 teammates around the Peavey Mart Centrium, the site of the Hlinka Gretzky Tournament starting Sunday and running through Aug. 6.

“A lot of the guys didn’t know what the rink was like coming in here. As soon as we walked in here they said “wow, you guys have a super nice facility’”, said Lind.

“I think it’s one of the best in the league and the tournament should be a lot of fun. We have a great group of guys and the fans are great here. It should be a fun week.”

Lind made the national U18 team following an intense, 44-player camp that concluded earlier this week at the WinSport Centre in Calgary.

He scored once and added an assist for Team White in the first intra-squad game, a 6-4 win over Team Red, and after being held off the  board in the second intra-squad game, he notched a goal in a 6-4 victory over one of the two Canadian U20 camp teams on Tuesday.

Lind, who’s not lacking in self confidence — and for good reason — felt he had done enough to earn a spot on the U18 squad.

“After the first two practices and the first game, I thought, yeah, I can see myself making this team. I just decided I wouldn’t leave anything on the table and show the coaches what I can do,” he said.

“Soon after I felt pretty confident that I’d be here. I went in for the meeting and was told I had made the team, so I was pretty excited.”

The 2023 NHL entry draft is projected to be one of the deepest in years and almost certainly many of the players in this year’s Hlinka Gretzky Tournament will be selected, including a large group in the first round.

“Everyone there (selection camp) was a great hockey player, it was really hard for the coaches and the manager and everyone, but they got the best guys possible and we’re going to have a great team,” said Lind. “Hopefully we can come in here and win this tournament.”

The Canadian crew will definitely be one of the favourites in the international event after splitting a pair of games against the older Canadian U20 national junior team this week in Calgary.

“We beat the under-20 team and that’s a big accomplishment if you ask me,” said Lind. “We were right there with players a year and two years older than us, the best in Canada.

“So it was pretty great for us. We lost the second game 3-1 with an empty net goal. We played pretty good hockey against a really good team of older players.”

Lind scored 20 goals and collected 38 points in 61 games as a 16-year-old with the Rebels in the 2021-22 WHL season — then added a goal and five assists in 10 playoff contests — displaying his obvious talent and two-way, gritty game while also accumulating 93 minutes in penalties.

In fact, he’s confident his sandpaper style and strong two-way game helped him in his quest for a roster spot on the national U18 squad.

“For sure, in making the team I was told I’m one of the grittiest players they’ve seen in a long time,” said Lind. “Just getting under people’s skin and throwing my body around, it’s obviously a big part of my game.

“Being in Red Deer and learning from Steve (current head coach Konowalchuk) and Brent (former head coach Sutter) how to play a two-way game . . . what they taught me really helped me coming into this camp.”

Lind played on a line with two of his U18 teammates — Riley Heidt of the Prince George Cougars and Brayden Yager of the Moose Jaw Warriors — with the Saskatoon Contacts during the shortened ’20-21 season. The trio dominated the Saskatchewan Midget AAA League over six games, with Lind recording a league-best seven goals and 14 points.

Will they be reunited for the Hlinka Gretzky Tournament?

“There’s a chance, but I’m playing with two very good players right now in (Ethan) Gauthier (Sherbrooke, QMJHL) and Matthew Wood (Victoria, BCHL),” he said. “I’d be happy to play with anyone on this team.”

“I’m think I’m a little more than that but we’ll see what I am coming into next season,” he joked.

Whatever, he’s convinced that he’ll be an even better player for the Rebels in ‘2022-23 due to his experience over the coming week.

“For sure, I feel that I’m back in shape already,” he said. “Coming into (Rebels) camp I should have some pretty high confidence out of this tournament and I should be in great shape and ready for next season.”

More than anything, he’s ready to take on the best in the rest of the world in the upcoming tournament in front of Red Deer fans.

“Red Deer is part of me now and is going to be a part of me for a long time, probably for the rest of my life,” said Lind. “It’s going to be pretty big to see some familiar faces in the crowd and have some of my fans behind  me during this tournament.

“It should be great.”

Canada will take on Switzerland in a pre-tournament game Friday at 7 p.m. at the Centrium, preceded by exhibition games between the United States and Slovakia at 11 a.m. and Sweden and Czechia at 3 p.m.

Canada will compete in Group A of the eight-team tournament, along with Switzerland, Slovakia and Sweden. Group B will consist of Finland, Czechia, Germany and the United States.

Canada’s first tournament game is Sunday at 7 p.m. versus Switzerland.