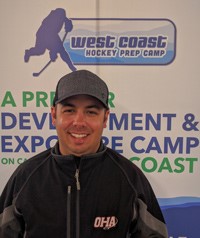 Lamoureux joined the Rebels as an Assistant Coach in June of 2016.

Brent Sutter – “The Red Deer Rebels would like to thank Pierre for his commitment he made to the organization over this past season as an assistant coach. We wish him and his fiancé  Randi all the best in this future endeavor to get to his ultimate goal of becoming a head coach.”

Pierre-Paul Lamoureux – “I’m grateful for the opportunity to work with the players and staff in Red Deer. I’ve always considered Red Deer home. To have the chance to coach in the Western League for my alma mater holds special meaning for me. I’m excited to move my coaching career forward and the Rebels have aided in my growth as a coach. I want to give special thanks to the Rebels staff, but a special debt of gratitude to the Sutter, Dakers, Lodge, Truitt, and Froese families for welcoming Randi and I with open arms.”

Anderson is from Sedgewick, Alberta and graduated from Red Deer College with a diploma in Kinesiology and completed his Kinesiology degree at the University of Alberta.

Brett Anderson – “I’m very excited to be coming home. I look forward to giving back to the Central Alberta community that has given so much to me.”