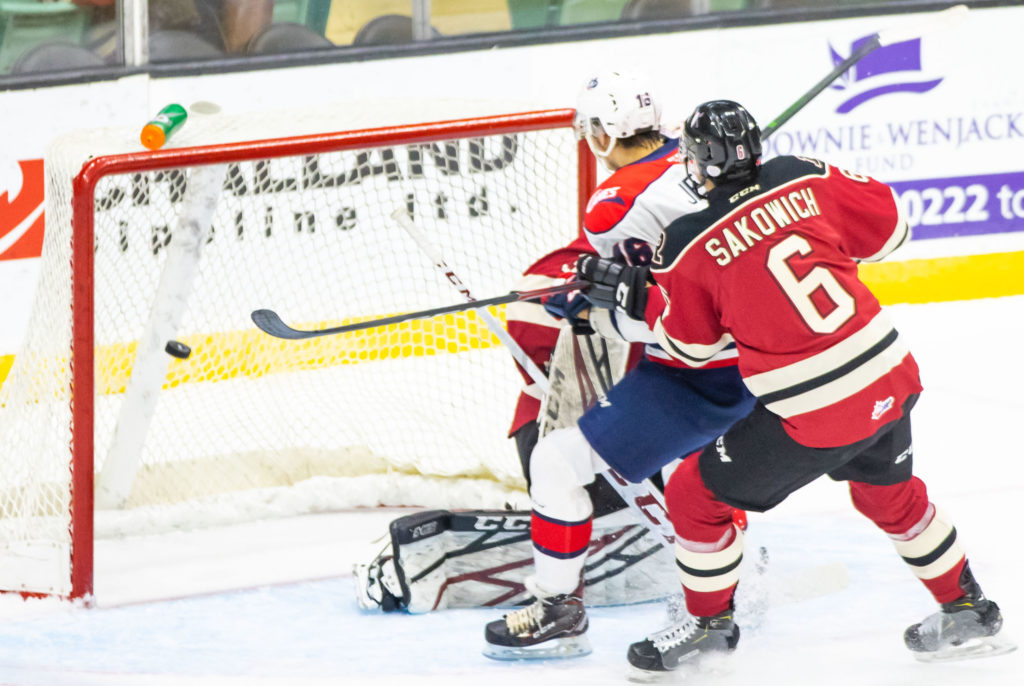 The game got away from the Red Deer Rebels in a first-period flurry of scoring Saturday night at the Centrium.

The visiting Lethbridge Hurricanes exploded for five unanswered first-period goals en route to an 11-2 WHL shellacking of the Rebels in front of 4,057 fans. Twenty minutes in and it was game, set and match.

“What do you say?” queried Rebels GM/head coach Brent Sutter. “Right from our goaltenders on out . . . we had three or four goals against us on the first 11 to 12 shots and we were behind all night.”

Koletrane Wilson opened the scoring 3:20 into the contest, slipping in behind the Red Deer defence, taking a pass from Noah Boyko and guiding the puck through the pads of Ethan Anders from in tight. It was the Hurricanes’ first shot.

Then came a disastrous four-minute stretch that closed out the period.

Boyko scored on a two-on-one at 15:30 and former Rebels forward D-Jay Jerome sandwiched a pair of goals around a marker from Dylan Cozens before the period ended.

Jerome cashed a rebound that chased Anders from the Red Deer net, Cozens fired a one-timer past replacement Byron Fancy following a turnover just over three minutes later and Jerome broke in alone and connected again with 15 seconds left.

“Look at the goal with Barts (Rebels defenceman Dawson Barteaux),” said Sutter, in reference to the error that led to Cozens’ goal. “All you have to do is move the puck up the ice. He spins around a couple of times and skates into his defensive partner in front of our net, turns it over and it’s in our net.

“That’s not the way you play hockey.”

The ‘Canes continued with their opportunistic play in the second period, scoring three times on eight shots.

Defenceman Calen Addison sniped his first of three goals on the evening during a power play — his shot from the top of the right circle finding twine— before Cam Hausinger replied for the hosts three minutes later as the trailer on a play inside the Lethbridge blueline.

Addison added another man-advantage tally with a slap shot from inside the right circle and Justin Hall skated in undisturbed and beat Fancy high to the glove side.

“Our effort, especially in the second period, wasn’t good,” said Sutter. “Our focus, we just can’t hold our focus in a game. It’s tough when you have a young team and get down early.

“There were breakdowns. We have a lot of work to do. But our older guys, we need better leadership from them and when I say leadership it’s playing the game the right way, doing things right as far as our details.” 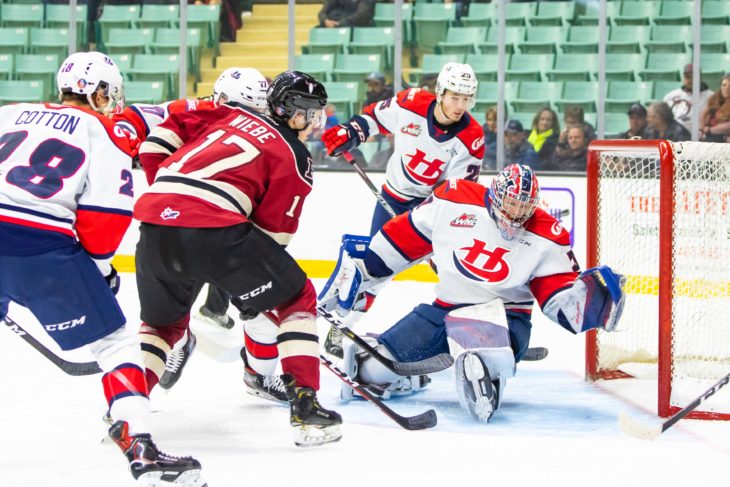 Logan Barlage accounted for the ‘Canes’ ninth goal just 42 seconds into the third period, cashing his own rebound off the end boards. Addison completed his hat trick on a screened shot from the high slot three minutes later and Trevor Thurston added a power-play goal at 12:58 with a slapper from the right circle.

Red Deer defenceman Ethan Sakowich scored the game’s 13th goal with a slap shot from just inside the point at 15:26.

Bryan Thomson made 26 saves in the Lethbridge net while Sutter shifted Anders and Fancy in and out of the Red Deer goal on numerous occasions.

Anders stopped 19 of the 23 shots he faced and Fancy gave up seven goals on 14 shots.

Overall, it was a gruesome evening for the Rebels, whose youth — particularly on the blueline — was exposed.

“Our young kids have to understand and learn how to play within the structure of our game as far as systems go,” said Sutter. “I thought our young defence really fought it tonight. Every one of them struggled.

“But again, when you’re fighting and fighting and chasing the game early . . .  with a young team it’s an uphill battle. I’m not going to keep using the young team as an excuse because we have young players who have to get better, have to stop making the same mistakes over and over.

“They have to understand there is some bite you need in the game, it’s not a game you can play soft in. And our older guys have to be more responsible with the things they do too. Tonight it was definitely a whole team effort in taking that loss.”

Notable: The Hurricanes were three-for-nine on the power play, the Rebels zero-for-four . . . Selected as the three stars were (1) Cozens, who scored once and added four assists, (2) Addison and (3) Barlage, who had a goal and two helpers . . . The Rebels return to action Tuesday against the Broncos in Swift Current. Red Deer’s next home game is next Saturday against the Regina Pats.