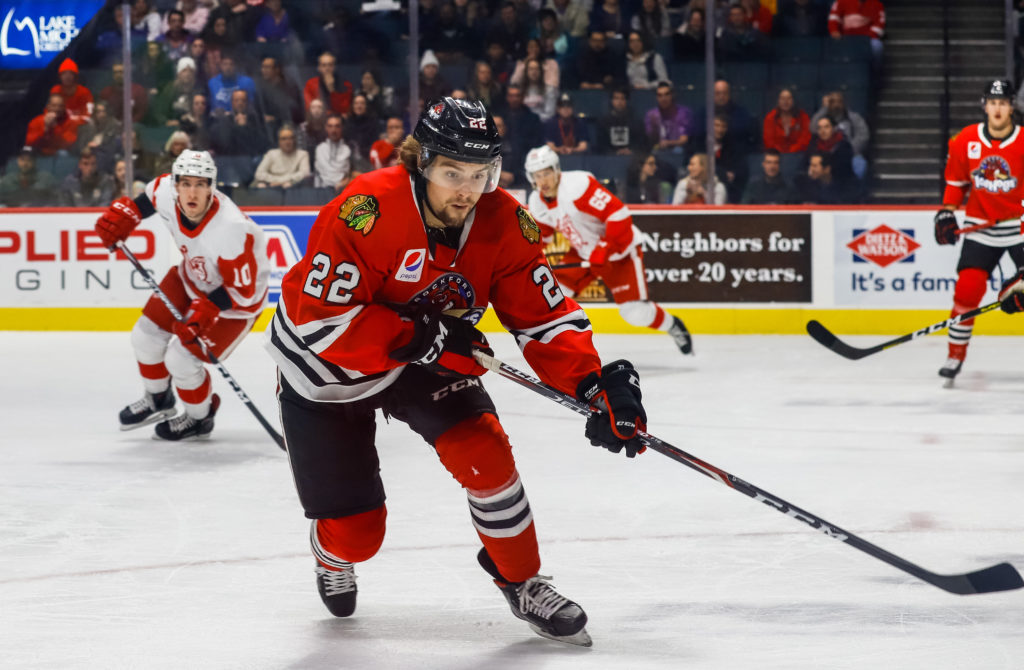 For Brandon Hagel, it was third time lucky.

After getting recalled from the Rockford IceHogs of the American Hockey League on two earlier occasions during the 2019-20 season, Hagel finally made his NHL debut with the Chicago Blackhawks on March 11.

Just in time, too, as it turned out.

Just one day prior to the NHL postponing the season due to the COVID-19 pandemic, Hagel helped the Hawks roll over the visiting San Jose Sharks 6-2 at the United Center.

The former Red Deer Rebels star winger didn’t record a point in the contest, but did have four shots on goal.

“It was pretty cool. I was just excited to be there,” Hagel said on Thursday. “Coming up for my third time I was finally getting to play and it helped that I was comfortable with the guys.

“Obviously it was a dream come true, playing in front of 25,000 people. It was pretty crazy but definitely the best experience of my life so far.”

That Hagel was recalled by the Blackhawks on three occasions was a no-brainer, considering he was the IceHogs’ best player. The Morinville native led the AHL club with 19 goals and 31 points in 59 games and was named Rockford’s most valuable player and rookie of the year.

“Coming into the season I was a bit nervous, but I was given some opportunity and I think I took advantage of it,” he said. “It panned out pretty good for myself.

“Overall I thought I had a pretty good year, but I just have to keep going and stick to what I do best and it will work out in the long run.”

That fact that he joined Rockford for the final eight games following the Rebels 2018-19 season helped him adjust to the pro game.

“That helped quite a bit. I knew what to expect coming into the year, not just on the ice but off the ice with the coaching staff and all of the people involved,” he said. “I was a little more comfortable that way and that can go a long ways.”

Following his rookie year with the Rebels, Hagel was selected by the Buffalo Sabres in the sixth round of the 2016 NHL entry-level draft. However, he was never offered a contract by the Sabres.

Hagel wasn’t redrafted two years later, but opened the 2018-19 WHL season on a tear and as a free agent signed a three year entry-level deal with the Blackhawks in late October.

Hagel never let up and went on to finish with 41 goals and 102 points in 66 WHL regular-season contests. He then added four goals and two assists in four playoff games.

“Obviously, and I’ve said this a lot, when Buffalo didn’t sign me it kind of turned my head a bit,” he said. “Maybe I was doing something wrong, maybe I have to pick it up.

“I can’t thank the Sutters enough. Brent (GM/head coach) helped me out so much along the way, with everything he did to help me get to the next level. I always wanted to prove Buffalo wrong and I think I did a pretty good job of that.”

“Living on your own was a bit different, but they set you up real nice. They have a chef give you cooking classes and they do absolutely everything to make it easy for you,” he said.

“Myself and my roommate, McKenzie Entwistle . . . we were both good about that stuff.”

Hagel is still on the Blackhawks roster and therefore will attend training camp with the big club when it opens on the presumed date of July 10.

“That’s the date as of now,” he said. “Does it start then? I don’t know. Only if the medical people say it’s safe.”

If Hagel can continue to build on his rookie pro season he’ll get a long look from the Blackhawks sooner than later.

“My goal going into camp is to make the team,” he said. “Obviously I have to prove myself but I think I’m ready. I just have to have a good summer of training and I think I can make that team.”