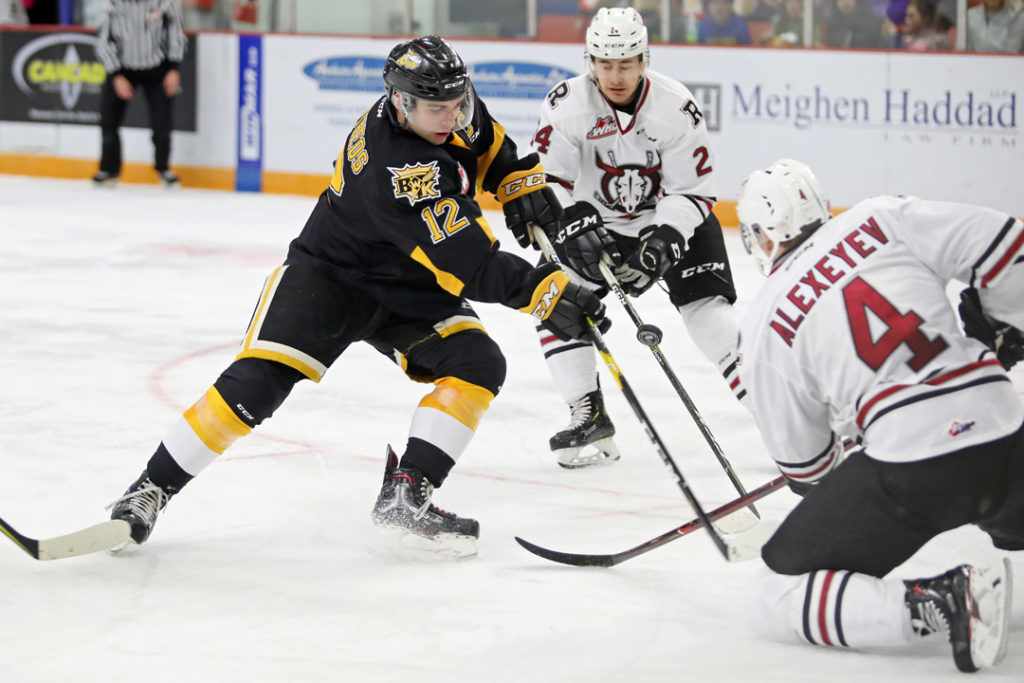 BRANDON — The Red Deer Rebels were cruising along with a 2-0 second-period lead Friday night at Westoba Place.

“We made some bad plays, started turning pucks over, took some bad penalties and gave them momentum,” said Rebels GM/head coach Brent Sutter, who watched the host Wheat Kings pot the next three goals in the period.

“From that point on I didn’t think we played very good.”

Indeed, the Rebels were outscored 3-1 the rest of the way and eventually dropped a 6-3 Western Hockey League decision in front of 4,114 fans.

Following a scoreless opening frame, the Rebels tallied twice in an 11-second span early in the middle period.

First, Brandon Hagel passed back to defenceman Alex Alexeyev, who in turned faked a shot and relayed the puck back to Hagel, who beat Brandon netminder Jiri Patera with a one-timer from deep in the right circle.

The goal at 2:55 was followed by another at 3:06, with Zak Smith chipping a rebound of a Reese Johnson shot over Patera.

The tide started to turn midway through the frame when the Wheat Kings took advantage of a fortunate bounce. Luka Burzan’s pass attempt bounced off Red Deer defenceman Dawson Barteaux and the rebound ended up on the stick of Lynden McCallum and quickly behind Rebels goaltender Ethan Anders.

Back to back Red Deer penalties gave the Wheat Kings a lengthy two-man advantage and Stelio Mattheos pulled the hosts even from the low slot at 15:26.

From there, defenceman Neithan Salame notched his first-ever WHL goal late in the period to give the home side a lead it wouldn’t relinquish.

“They tied it up and a couple shifts later scored again for the lead and we never regrouped after that,” said Sutter. “We never pushed the pace the rest of the game.”

Brandon basically put the game away with successive third-period goals off the sticks of Marcus Sekundiak and Ben McCartney. Rebels veteran Jeff de Wit closed the gap to 5-3 on a fine individual effort late in the game, but Burzan scored an empty-net goal shortly after to seal the deal.

“Our goaltender didn’t have a great night and our fourth line gave up two key goals, their third and fourth goals,” said Sutter. “We just had too many guys who weren’t where we needed them to be tonight.” 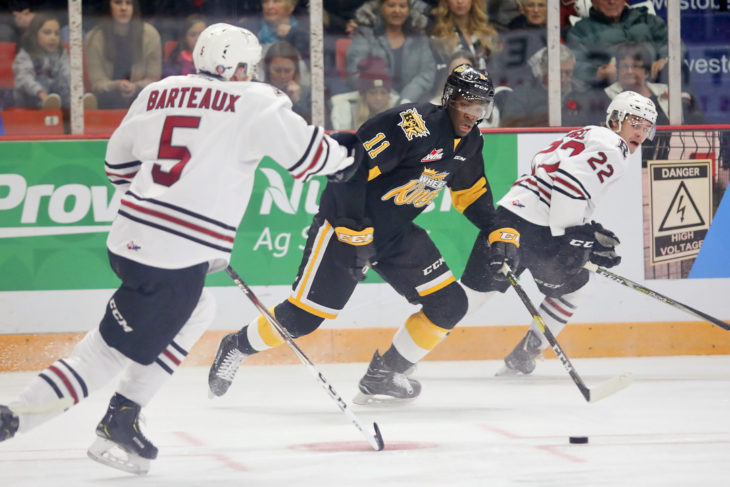 While Anders, who finished with 30 saves, wasn’t at his best, Patera was in fine form while facing 43 shots. The Czech import and Las Vegas Golden Knights draft pick came up with several outstanding stops, but that was small consolation to Sutter, who didn’t like his club’s defensive play.

“He (Patera) played well, but that had nothing to do with the goals we gave up,” said the Rebels boss. “That’s what bothers you from a coach’s perspective. Yeah, we had scoring chances but it’s the type of goals that you give up.

“The way certain individuals played tonight . . . you can’t have that. We have to be a very competitive team, we have to have everybody going.”

The Rebels were zero-for-two on the power play while the Wheat Kings were one-for-five.

The back to back infractions led to Brandon’s tying goal and while Sutter agreed that the second call — hooking on Hagel — was bogus, he pointed out that it’s become a bad habit for his club this season.

“We’ve done that too many times this year, put our team at a bad disadvantage,” he said. “We’re already short-handed and we take another  penalty with the first penalty killing unit on the ice and we end up being down five-on-three for nearly a full two minutes.

“And the penalties we take are just lazy penalties. “They’re avoidable if you’re thinking the right way and doing things the right way.”

Red Deer’s first power play was the result of a major charging penalty to Linden McCorrister, who was also assessed a game misconduct for the early first-period blindside hit on Rebels rearguard Jacob Herauf.

Herauf was helped off the ice and taken to hospital — where he remained for several hours — with an undisclosed injury.

“It’s a hit that’s avoidable,” he said, adding that the injury might be neck-related.

The Rebels continue their three-game road trip with a Saturday night engagement with the Moose Jaw Warriors.

“We have to be a lot better tomorrow night,” said Sutter.

The trip will conclude with a Sunday game in Swift Current.