Expectations for 2020-21 version of Rebels will be higher 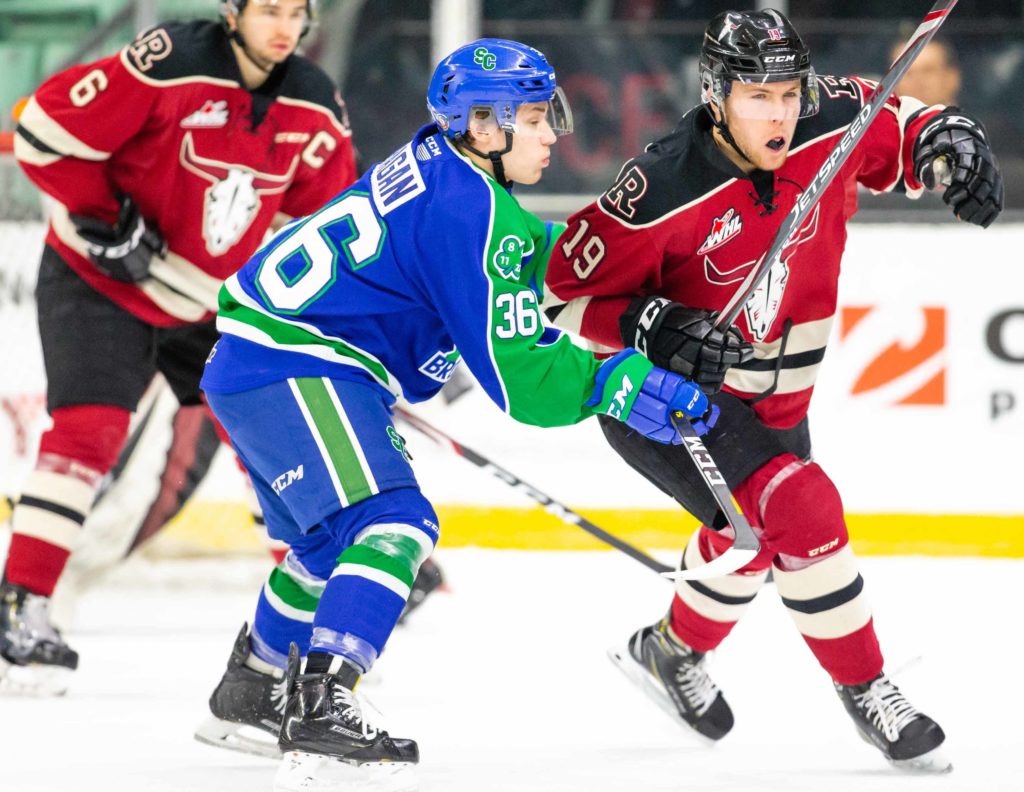 When the 2019-20 Western Hockey League season opened, the expectations of GM/head coach Brent Sutter were somewhat tempered due to the overwhelming youth and relative inexperience of his roster.

That won’t be the case when next season opens, whenever that might be, the uncertainty, of course, due to the ongoing COVID-19 pandemic.

The Rebels resembled the extremely youthful team they were during the early months of the now terminated season, taking it on the chin more often that not.

But as fall turned into winter and the season moved past Christmas, the squad started to turn the corner. The about face was gradual and didn’t allow the team to sneak into a playoff spot, but the overall improvement of the team was clearly noticeable.

When the puck drops to signal the start of the 2020-21 campaign, Sutter will expect the Rebels to continue to build on their latter half of the ’19-20 season.

“Whenever we do get started up again our expectations for these players will grow, and they should expect more of themselves too,” the Rebels boss said Monday, a few hours before the WHL officially cancelled the entire season.

“We knew coming into this past year — and we made it very clear from the start — that we were going to be a really young team. We knew we couldn’t waver from the plan, we had to grow these guys and let them develop.

“It was certainly a year for being patient, and not just from a hockey standpoint. We had so many young players who were away from home for the first time. They had to get used to living with billets.

“They also had to learn how to train off the ice. We had a really good group of older guys to help them through that, but it’s still a process when you’re talking 13 or 14 guys (17 years of age and under).

“It just takes time and we certainly took strides. There was a lot of teaching going on and just a lot of communication with the kids . . . staying on top of things and getting them to understand that you can never win until you late to lose. That’s a process.

“As the year went on the kids really started digging in with that. In our last 10 to 12 games of the season we played as well as we played all year.”

Indeed, the Rebels were more than respectable down the stretch, going 6-3-1-0 in their final 10 outings.

“We started coming on and making strides right before Christmas. You could see things taking shape,” said Sutter.

A big reason for the upward curve was not only the on-ice improvement of his players but also their acceptance of the functions they were expected to carry out.

“These kids were coming from where they were the best players on their (minor hockey) teams and were playing in all situations,” said Sutter. “Then they come here and it’s a whole different level. They had to learn to accept different roles from what they had in the past and grow from within those roles.

“From a coach’s perspective, it was us getting foundation laid for each player and then building up from that foundation. To a man they did, even our veterans.

“Early in the season we had a lot of veterans who struggled. They had new roles as well, all of sudden they were playing big minutes and in key situations, and it took some time to adjust. It also took awhile for them to get used to such a young team.”

While the younger set evolved and it became apparent that rookies such as Kyle Masters and Jayden Grubbe will be potential WHL all-stars down the road, the veterans, for the most part, carried the team.

“Look at Bainsy, with the season he had,” said Sutter, referring to team-leading point producer Arshdeep Bains, who scored 18 goals and added 33 assists for 51 points.

In addition, power forward Josh Tarzwell (pictured above) sniped a career best 32 goals — well up from his previous high of 11— Chris Douglas was particularly impressive late in the season and finished with 12 goals and 35 points, and Zak Smith also came on during the second half.

“Look how Tarz built his game through the year,” Sutter noted. “It took him awhile to accept what he is as a player and how he has to play. When he plays that way he’s dominant, he’s a man on the ice.”

Ben King, acquired from the Swift Current Broncos in November, was a valuable addition and finished second in team scoring with 20 goals and 46 points. As a totally committed 200-foot player, the 17-year-old (pictured below) resembled a seasoned veteran. 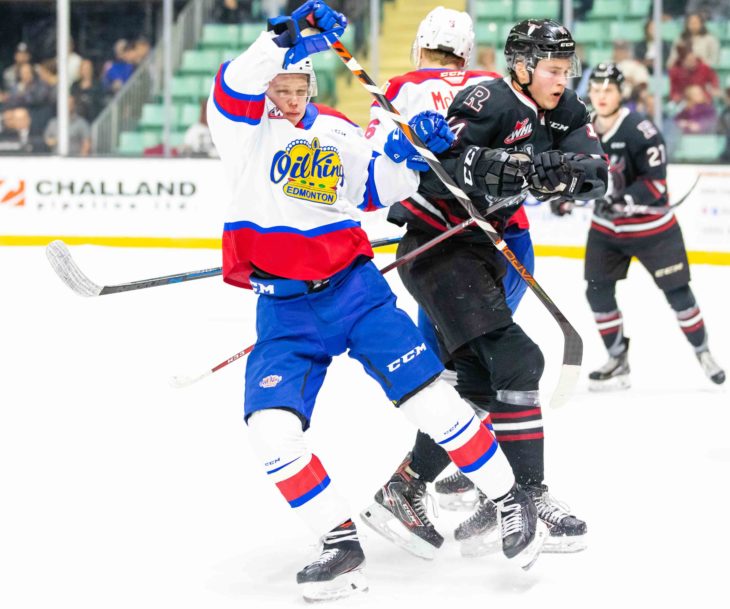 “With Kinger you had to catch yourself because you think he’s a 19-year-old,” said Sutter. “And that’s because of the key minutes he plays and that he’s such a smart player.”

King and Grubbe, both possessing size, skill and smarts, project as go-to centers in the coming seasons, and a blueline corps that featured Masters and four other rookies in ’19-20 should be a force in the not-too-distant future.

“There’s a huge upside here, but we knew it would take a year of being patient,” said Sutter. “But we went through it and now our expectations go to a different level.

“The players have to understand that and accept it too, and they have to take their level of training this summer to a different level.”

But therein lies a major problem with the closure of training facilities everywhere.

“We’re in a whole different world now,” said Sutter. “Where do the players train? They’ll have to learn to wing it and try and get through. We’re going to help them through that but with gyms and rinks closed and everything shut down now, it puts all athletes in a tough spot.

“That’s what our world is in now. We have to accept it and live within boundaries and do what’s been asked of everybody on this earth. You have to find ways to get creative and learn to be more disciplined than ever.”

The Rebels will return the vast majority of their team next season, the exceptions being Cam Hausinger and outgoing captain Ethan Sakowich who have aged out.

Included in the number of potential returnees are goaltenders Ethan Anders and Byron Fancy, both of whom struggled at times in ’19-20 but seemed to right their games over the final weeks.

“Our goaltending at times was very good and at times very erratic. But down the stretch they really started settling in,” said Sutter.

With nearly his entire roster set to be back and the fact he saw a promising rise in development during the past season, Sutter stressed he’ll set new standards for ’20-21.

“For the most part this year we were a real competitive team, especially during the last half to third of the season,” he said. “We were in the fight nearly every night.

‘We had some third-period lapses that cost us points in the second half of the season, but in the first half of the year we would have never been in that position going into third periods. So that was a positive.

“Next year our team expectations will be higher.”

° The 2020 U.S. Prospects Draft, to be staged online, and WHL bantam draft lottery will be held Wednesday. The Rebels pick first overall in the U.S. draft and as the 17th-placed team in the 22-team WHL, will have just one ball in the lottery as opposed to six for Swift Current, which finished last overall. Teams can move up no more than two places . . . The WHL bantam draft, originally scheduled for May 6-7 in Red Deer, will be conducted online April 22.