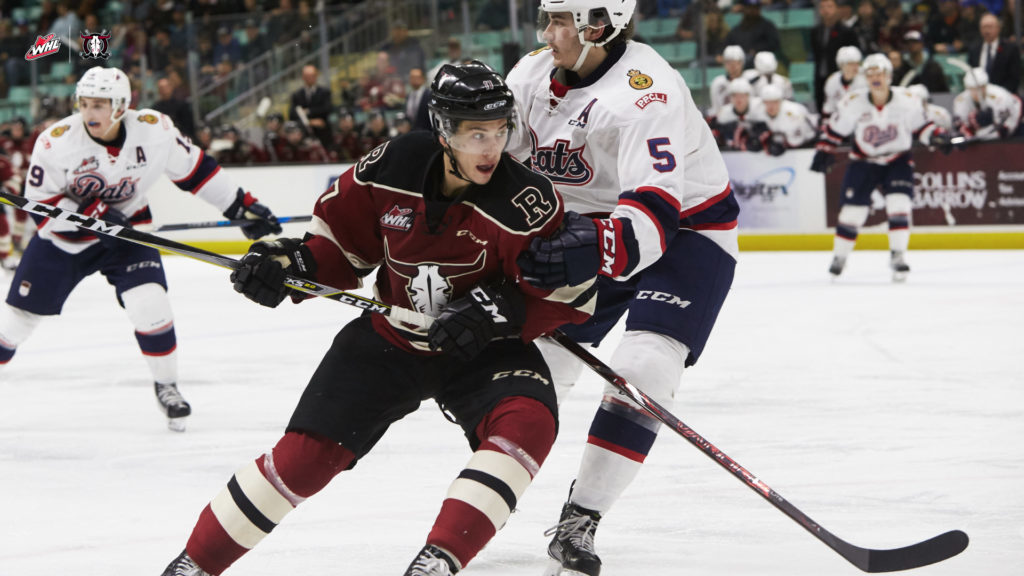 The last time the Prince George Cougars visited the Peavey Mart Centrium, Reese Johnson (pictured above) was the Rebels captain and he and Brandon Hagel, now both fourth-year pros, were in their final WHL season.

Yes, it’s been four years since Rebels fans have seen the Cougars, mostly due to the recent pandemic.

For the record, the Rebels defeated Prince George 5-1 on the night of Jan. 26, 2019, with Hagel scoring twice and Cam Hausinger, Brent Davis and last season’s WHL scoring champ Arshdeep Bains each notching a goal.

Ethan Anders, in his second of four seasons with Red Deer, made 26 saves as the Rebels outshot their guests 34-27. Anders is now in his second year with the University of British Columbia Thunderbirds.

The Cougars, coming off Wednesday’s 6-5 win over the host Calgary Hitmen, make their long-awaited return to Red Deer on Friday.

Netminder Tyler Brennan, meanwhile, was selected by the New Jersey Devils in the fourth round of last year’s NHL draft.

The Cougars roster also features a pair of former Rebels in forwards Jaxsen Wiebe and Arjun Bawa, the latter of whom was dealt to Prince George two weeks ago in return for Ryker Singer. Bawa is pointless in seven games with his new team.

Prince George has the third-most goals in the Western Conference with 158 and that number is reflected in a potent power play that’s second overall in the league with a success rate of 28.5 per cent.

The Cougars’ penalty kill, however, is near the other end of the spectrum — 18th at 71.6 per cent.

Notable: The Rebels head into Friday’s contest sitting first in the Central Division — with a wide 10-point lead over the Lethbridge Hurricanes — and second in the Eastern Conference, one point back of the Winnipeg Ice . . . The Rebels’ special teams are both top-10 in the WHL. Red Deer’s power play is clicking at 25.5 per cent, eighth overall, and the penalty kill is second at 84.3 per cent . . . Four Rebels are operating at a point-per game pace or better — forwards Kai Uchacz (41GP, 34-19-58), Jayden Grubbe (38GP,10-35-45), Ben King (5GP, 5-5-10) who could return to action this weekend after missing roughly three months with a lower-body injury, and Kalan Lind (36GP, 12-25-37). Forward Jace Isley (41GP, 21-16-37) and defenceman Christoffer Sedoff (39GP, 3-33-36) are close to that pace. Isley has been clutch for the Rebels as the WHL co-leader in short-handed goals with five, and is tied for second with six game-winners. Meanwhile, Hunter Mayo leads all WHL defencemen in goals with 14, while Uchacz is second overall in goals . . . Between the pipes, Rhett Stoesser is second overall with a 2.20 goals-against average and tied for second with two shutouts. Kyle Kelsey is eighth in save percentage at .916 . . . The Brandon Wheat Kings visit the Centrium on Saturday and the Rebels conclude a busy weekend by visiting the Calgary Hitmen on Sunday . . . Fans are asked to bring new toques, mitts and socks to Friday’s game as donations to the Alberta Health Services and SPARC Red Deer Winter Warm Up and Paint the Town Positive campaign . . . Saturday’s game is billed as 80s Night.