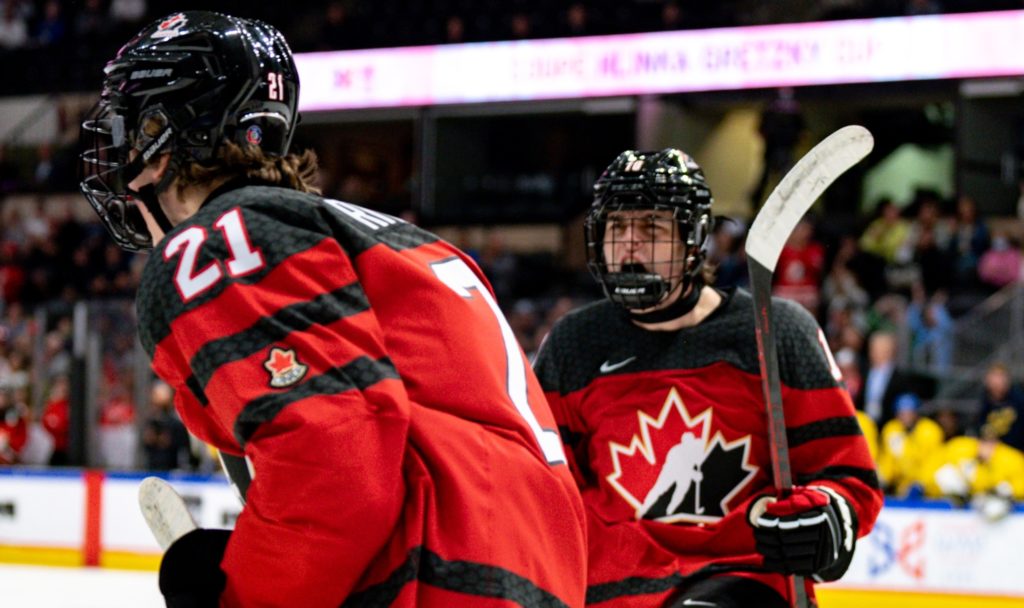 Team Canada faced adversity in the Hlinka Gretzky Cup for the first time Wednesday and stared it down in impressive fashion.

After posting a pair of one-sided victories over Switzerland and Slovakia in the international U18 tournament, the Canadians took on a stronger team in Sweden and came away with a well deserved 3-0 victory in front of roughly 2,500 fans at the Peavey Mart Centrium.

Canada placed first in the A Division with a 3-0 record and will meet Finland in a semifinal Friday at 5 p.m. Sweden will play Czechia in the other semifinal, set for 8:30 p.m.

Wednesday’s outing was a true test for the Canadians, but the final score was not indicative of their dominance. Canada carried the play through the vast majority of the contest but Sweden was still in the game after two periods, trailing just 2-0 despite being outshot 31-9 at that point.

Swedish goaltender Eric Olsson did his best to keep his team in the game, but in the end Canada was simply the better squad in what seemed like a probable preview of Saturday’s gold medal match up.

“We had a big challenge in front us and what I liked was the first 40 minutes we didn’t give much in the defensive zone,” said Canada head coach Stephane Julien.

“I liked the commitment . . . a lot of blocked shots in a very physical game. They (Sweden) are a team that is hard to beat in their zone, they were very good one-on-one. But I felt as more of the game went on we get some net presence and get some pucks at the net.”

Calum Ritchie notched what proved to be the winning goal just 3:29 into the game. The Oshawa (OHL) forward move out from behind the net and directed a wrist shot that went of the stick of a Swedish defender and past Olsson.

Zach Benson (Winnipeg, WHL) made it 2-0 just past the midway point of the second period, finishing off a three-way passing play with linemates Ethan Gauthier (Sherbrooke, QMJHL) and Brayden Yager (Moose Jaw, WHL) with a backhand from close range.

Yager closed out the scoring about six minutes later, beating Olsson with a power play laser from the right faceoff circle.

“I thought we did a very good job. This was one of our first tests,” said Yager. “They’re a really good team and it was a huge game for us. We came out strong and played a full 60 minutes.”

Sweden finished zero-for-four on the power play while the Canadians were one-for-one.

“Our penalty kill has been unbelievable. Guys are very committed and goaltending has played a big part in the PK,” said Julien. “I think we deserved a couple more power plays, but when you have the lead you sometimes feel like you have to kill more penalties. But overall it was good.”

Yager praised his team’s overall performance that included a strong outing from netminder Scott Ratzlaff (Seattle, WHL) who had to be sharp despite facing only 18 shots.

“I thought we did a very good job in one of our first tests,” he said. “Sweden is  really good team and it was  huge game for us. We came out strong and played a full 60 minutes.”

As for Ratzlaff and Canada’s penalty kill . . .

“If your goaltender can be your best penalty killer, you’re in a good spot,” said Yager. “I thought Ratz played a hell of a game and our penalty killers did a great job. We just have to stay out of the (penalty) box a bit more and just play our game.”

In the morning contest, Michael Hrabal turned aside 34 shots to lead Czechia past the US.

Jan Kucera, Jan Sprynar and Jakub Dvorak, into an empty net, scored for the winners, who finished first in Group B with two regulation wins and an overtime victory.

Tanner Adams notched the lone goal for the United States, which finished with a win and two losses and will compete in a placement game Friday.

Hampton Slukynsky made 17 saves for the US.

Daniel Alexander Jencko also scored for the winners, while Rafael Meier and Kevin Zurcher replied for the Swiss, who held a 34-31 edge in shots.