Better late than never for Rebels and Formanek 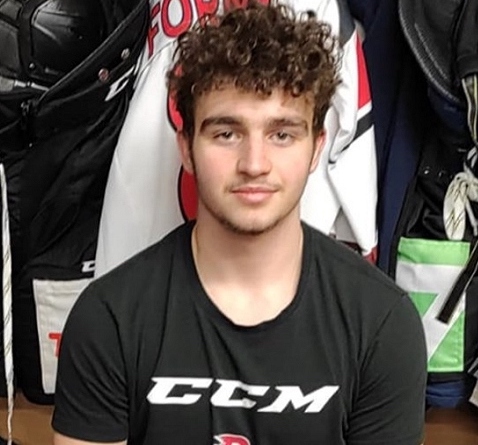 A little less than seven months after being selected by the Rebels in the CHL import draft, Frantisek Formanek is ready to play his first Western Hockey League game.

Formanek arrived in Red Deer Dec. 30 and after an ensuing layoff due to a number of COVID cases on the team, started practising Wednesday at the Peavey Mart Centrium, where he’ll make his WHL debut Friday against the Brandon Wheat Kings.

“It’s a great feel to be here. I hope to help this team go to the (league) final and win it,” he said.

The 17-year-old centre from Chrudim, Czechia, was excited about the

prospect of joining the Rebels upon being drafted in late June, but was unable to get his release from his club team, HC Dynamo Pardubice.

“I was really happy when my agent called me to say I was drafted here,” he said. “I am here now and ready for play.”

Rebels associate general manager Shaun Sutter worked with Formanek’s agent in a bid to get his release, which was recently granted when the player’s parents met with the agent and Dynamo officials, who finally relented.

“They came to a decision that they would release him to come to Red Deer,” said Rebels president and GM Brent Sutter, who was also involved in the negotiations. “He’s always wanted to come but there where conditions with the club team that they couldn’t do so until this point.

“With their position in their league standings, they wanted him to stay.”

Sutter met with the player upon his arrival in Red Deer and came away impressed.

“He’s a fantastic kid and a good player,” said the Rebels GM, who also watched him practise in Penhold a few days after his arrival before the team was shut down for COVID concerns.

“He has skills, he can shoot and he likes to score,” said Sutter. “Plus, he’s a strong kid. He’s a five-foot-nine, 190-pound player who has legs like tree trunks, and he can skate.”

Formanek played two games at the professional level in his home country this season, picking up one assist. The bulk of his season was spent with the HC Dynamo Pardubice junior team. He played 23 games with the under-20 club, scoring eight goals and recording 23 points.

“I think I’m a shooter,” said Formanek, who doesn’t shy away from physical play, as evidenced by the fact he racked up 34 minutes in penalties in the U20 league. “I like hard games. I think I have good spirit and good judgement.”

So far, Formanek likes everything about his new surroundings and new teammates.

“It’s very nice people here in Canada and the guys (teammates) here are super,” he said. “I like it here so much.”

The Rebels are equally as pleased to have Formanek on board.

“We’re excited to have him,” said Sutter. “He’s 17 so he’s someone we see as being a big part of this program for the next couple of years.

“We’re excited that the commitment was finally made by his club team for him to come to North America to play.”

Formanek, who lives with the same billet family as Rebels forward Jace Isley, will get his first taste of Canadian major junior hockey Friday.

“I’m really happy to have a game finally because we have five days in quarantine (last week). Finally the game is here so I’m ready to play.”