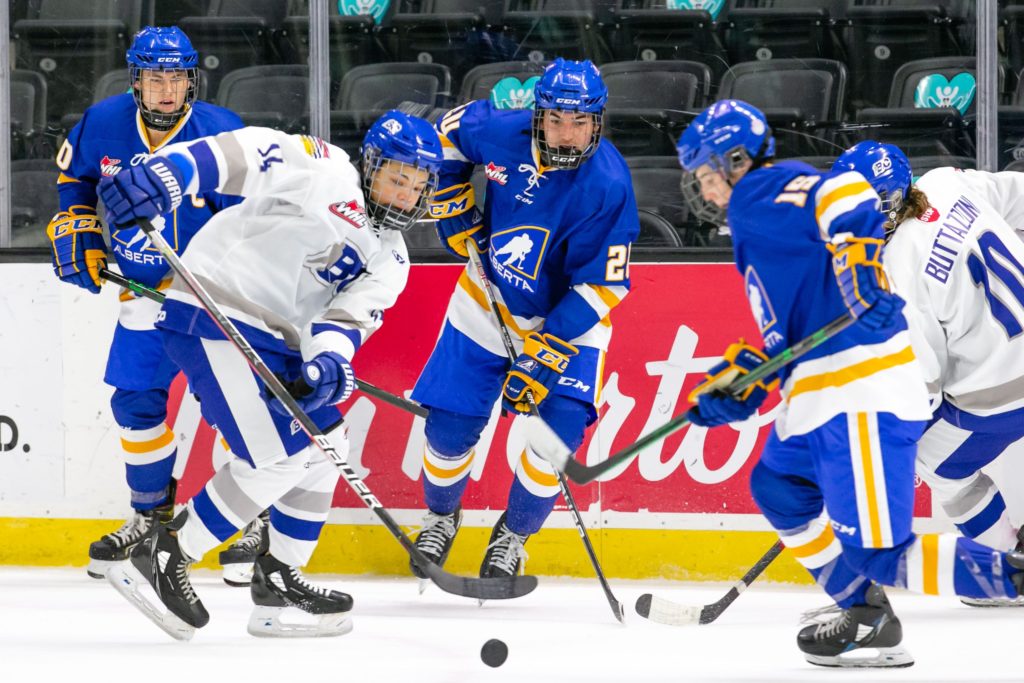 The cream rose to the top.

Team BC was undefeated during the round-robin portion of the 2021 WHL Cup and carried that status into Sunday’s gold-medal game after a one-sided semifinal win over Saskatchewan the day before.

Naturally, they entered the championship contest as at least slight favourites and lived up to the billing with a 5-2 win over Team Alberta at the Peavey Mart Centrium.

This BC squad was loaded with talent, and sometimes with a collection of all-stars there are not enough pucks on the ice to satisfy them all. But this year’s WHL Cup champs played as a team from start to finish.

“Anytime we drew up some sort of a plan or an adjustment, the players executed it right away,” said BC head coach Jamie Jackson. “It’s a fantastic group of young men. I’m proud of them.

“They really came together and our mission was to make sure we did it together, and they sure did.”

The outcome of the game was in doubt until the final minute, when the eventual champs potted a pair of empty-net goals off the sticks of Carson Wetsch and Oliver Josephson.

“We knew this was going to be a tough one, that they would play us hard,” said Jackson, whose crew needed overtime to beat Alberta during round-robin play.

“We had a bronze medal win against them a couple years ago (2019 WHL Cup) and I know they were still sour about that. We knew they were going to put a lot of effort into this game and we had to match our preparation to their’s.

Following a scoreless opening period, BC connected first when Hiroki Gojsic jammed the puck home from the edge of the crease early in the middle frame.

Alberta pulled even seven minutes later as Gavin Garland worked off the left boards, cut to the net and slipped the puck past netminder Jesse Sanche.

BC regained the lead late in the period when William McIsaac, from the top of the right circle, scored on a one-timer of a behind-the-net pass from Jordan Gavin, then gave themselves some breathing room on an early third-period goal from Cayden Lidstrom, who beat goalie Madden Mulawka from low in the left circle. 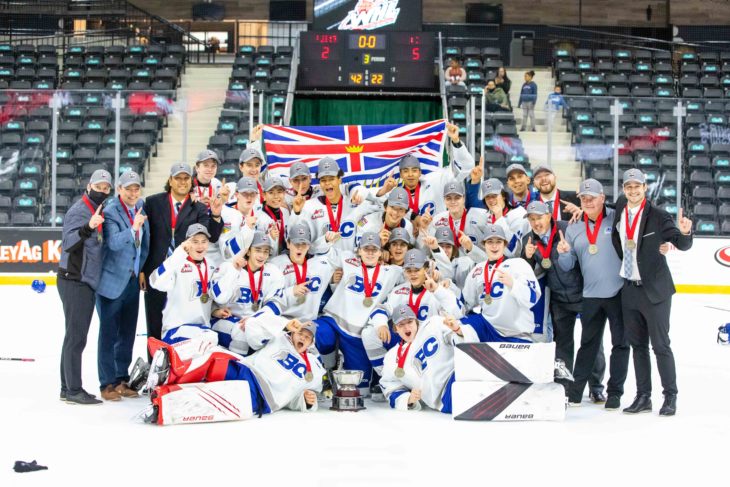 But that measure of security vanished when Garrett Thom created a turnover at the Alberta blueline and scored on a short-handed breakaway to make it a 3-2 game.

Alberta applied pressure down the stretch but couldn’t find an equalizer, leading to the pair of empty-net markers.

Both netminders were outstanding in a game featuring two evenly-matched teams.

Sanche, who got the call for BC due to an injury to planned starter Evan Gardner, made 30 saves. He foiled Zane Saab on a penalty shot and also took goals away from Kayden Longley and Reid Varkonyi.

Mulawka, meanwhile, turned in a 32-save performance. He denied Gojsic on a first-period breakaway and robbed Lynden Lakovic and Miguel Marques with a lively glove.

“I’m most proud of the fact we got everyone involved,” said Jackson. “We didn’t leave anybody behind today and all week.”

Earlier, Saskatchewan got a late third-period goal from Ashton Tait to edge Manitoba 3-2 in the bronze-medal game.

Trae Wilkie and Tyson Buczkowski also scored for the winners, while Cole Cairns and Hayden Moore accounted for the Manitoba goals.

Notable: Named to the WHL Cup all-star team were netminder Ethan McCallum of Manitoba, defencemen Jonas Woo of Manitoba and Red Deer product Keith McInnis of Team Alberta, and BC forwards Gavin, Marques and Mrsic . . . Marques was the tournament’s top scorer with 10 points (5g,5a). Teammates Gavin (4-5) and Mrsic (4-5) each had nine points . . . Gardner posted the top save percentage of .953.