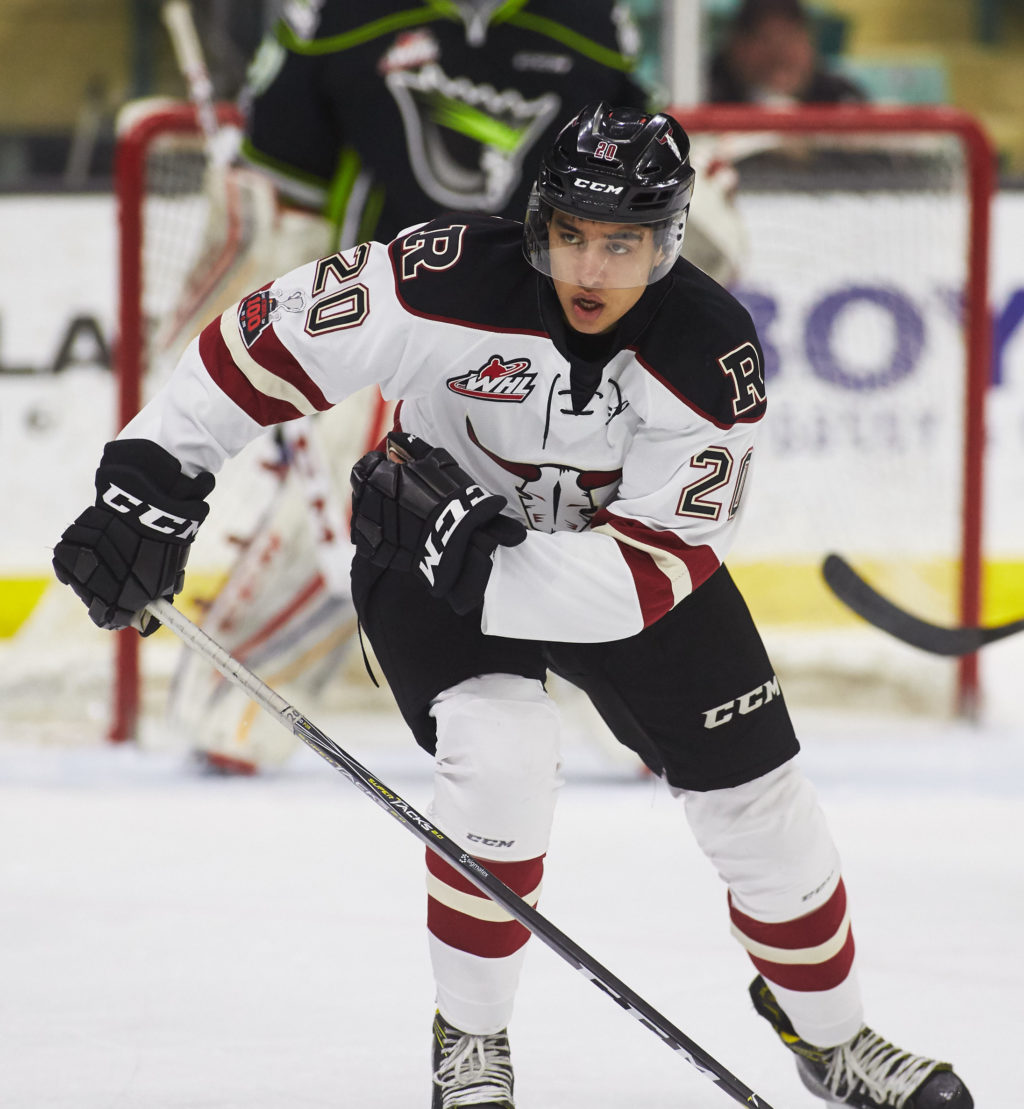 Considering the success he was enjoying with the Valley West Hawks, perhaps Arshdeep Bains should have suspected he might be playing at a higher level sooner than later.
And yet, the 16-year-old admitted Tuesday that he was somewhat surprised when he was summoned to the Red Deer Rebels in December.
“Yeah, a little bit,” he said, prior to a practice session in preparation for Wednesday’s clash with the visiting Moose Jaw Warriors. “But I had a good start to the season. I thought I played really well.
“Coming here made it all worthwhile. It’s awesome getting an opportunity to play here.”
Bains, listed by the Rebels last year after being passed over in the WHL bantam draft, was tearing it up in the BC Major Midget Hockey League this season, producing a league-best 56 points — including 16 goals — in 22 games prior to being called up.
After scoring seven goals and recording 23 points in 26 games with the major midget Vancouver Northeast Giants in 2016-17, he clearly ascended to a whole new level one year later.
“I thought I improved a lot over last year,” he said. “I just played better, played harder and got points. Just my overall game got better.”
Bains, a six-foot, 174-pound winger, notched his first WHL goal in Saturday’s 4-3 overtime loss at Medicine Hat while skating on a line with 20-year-olds Grayson Pawlenchuk and Mason McCarty, and has garnered three points with the team through five games.
“It’s awesome playing with them,” said Bains. “They make it a lot easier to adjust. You just have to work hard and listen to what they have to say to you.
“It helps when you’re playing with good players. Pawly and Carts are always looking for me, we’re always looking for each other. It’s working well.” Bains is a self-described skilled forward who also plays a responsible game away from the puck.
“I’d say I’m a smart forward who likes to make good passes and can score if I have the chance,” he said. “I’m always looking for my linemates and I can play defensively if needed. I’m just working on my 200-game right now.”
Rebels GM/head coach Brent Sutter is appreciative of Bains’ talents and his ability to pay heed to details.
“He’s certainly come in and played well for a 16-year-old player. From a coaches perspective, you don’t have any issues at all with putting him on the ice,” said Sutter.
“He’s smart, he knows how to play the game. He’s strong, he has good size and he’s a very dependable guy. He has that offensive touch to him because he’s so smart.
“We’ve been really satisfied with his play. To come in here and play like he has is a credit to him.”
Bains is yet another player who’s been able to compete at the major junior level despite being ignored in the bantam draft.
“Here’s another guy who doesn’t get drafted. He’s a listed player who has a decent 15-year-old season and this year just takes another step,” said Sutter. “He was leading his league in scoring when we called him up and he’s come in here and hasn’t really missed a beat. His practice habits are good, he’s good at everything he does. And he has size to go with it.
“He’s been playing on one of our power play units and he’s in a top six forward role. It certainly has been beneficial for him to come here and be developed at this level rather than at triple A midget, and the same goes for (fellow Rebels rookies) Justin Svenson and River Fahey.”
Whether Bains was originally a temporary call-up isn’t clear, but with the way he’s performed with the Rebels it’s no surprise that he’ll remain with the club for the remainder of the season.
“That’s just what has made everything worth it — this move to the next level,” said Bains. “Now we want to try and make a run (for the playoffs). We want to get winning again.”
Notable: Rebels prospect Alex Morozoff, a forward with the midget AAA Saskatoon Contacts, was a major player in the just-completed Macs tournament in Calgary. The 16-year-old was the top scorer in the event with seven goals and 13 points in four games, was also named most valuable player and was selected as a first-team all-star. Morozoff was a seventh-round selection of the Rebels in the 2016 bantam draft.

Scouting Report
Rebels vs. Moose Jaw Warriors, Wednesday, 7 p.m., Centrium
The Warriors are the top team in the WHL with a record of 30-6-1-2 and have posted an 8-1-0-1 record in their last 10 games . . . LW Brayden Burke is the league’s No.1 point producer with 77 (19g,58a) in 37 games. C Jayden Halbgewachs is third overall with 71 points, including 40 goals, while C Juston Almeida is ninth with 57 (22-35). LW Tanner Jeannot provides secondary scoring with 28 goals and 52 points, as do C Ryan Peckford (15-19-34) and C Brett Howden (13-18-31 in 20 contests), who’s currently with the Canadian team at the world juniors. D Jett Woo, a projected first-round pick in this year’s NHL entry draft, has scored seven goals and added 12 assists in 22 games . . . Regular starter Brody Willms is fourth among WHL goaltenders with a 3.04 goals-against average and 15th with a .903 save percentage. Willms has won 23 of his 29 appearances . . . Howden was selected by Tampa Bay in the first round of the 2016 NHL entry draft. D Dmitri Zaitsev was taken by Washington in the seventh round of the same draft. Halbgewachs recently signed an entry-level free-agent deal with San Jose.
Injuries: Moose Jaw — None to report. Red Deer — LW Brandon Hagel (upper body, week-to-week).
Special teams: Moose Jaw —Power play 27.3 per cent, fifth overall; penalty kill 82 per cent, second. Red Deer — Power play 15.8 per cent, 21st overall; penalty kill 76.5 per cent, 14th.