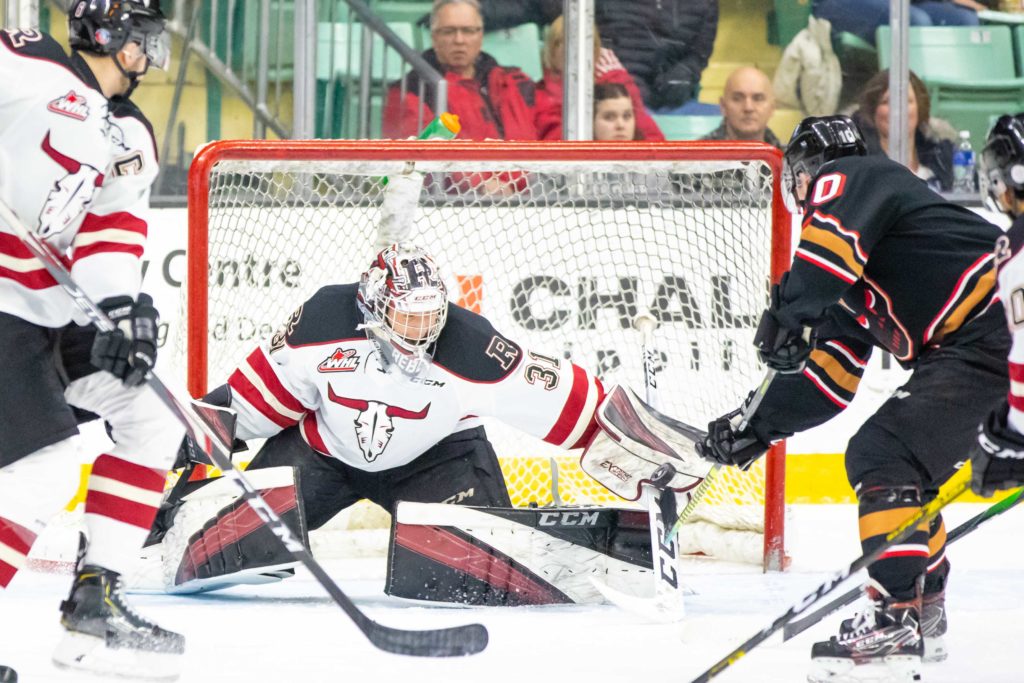 As the final seconds wound down Saturday evening at the Centrium, Ethan Anders felt a sense of reassurance.

“Definitely a big sigh of relief for me,” said the Red Deer Rebels netminder after turning in an outstanding 41-save performance in a 3-0 victory over the Calgary Hitmen.

“I felt awesome, now I just have to keep it going for the rest of the season.”

The shutout, witnessed by a recorded gathering of 4,268, was his first of the season and fourth of his WHL career. He frustrated the visitors at every turn and was clearly dialled in all evening.

“It was a busy one for sure but as a whole group we played really well,” said the 19-year-old. “We didn’t have a lot of shots (18) but we scored on our opportunities and that’s what counts.”

Anders was sharp in Friday’s 2-1 loss at Edmonton and was even better 24 hours later.

“I’ve been having a couple good weeks of practice and I’m starting to carry that into games now,” he said. “When I go out there I’m just having a bit more fun, enjoying it a little bit more, and I think that’s helping a lot.”

On a night when Anders was simply spectacular, the Rebels’ penalty kill was also impressive, erasing four Hitmen power plays including three in the first half of the second period.

“Our goalie was the best player on the ice obviously, and our penalty kill was superb,” said Rebels GM/head coach Brent Sutter. “Again, your goalie has to be your best penalty killer and that goes hand in hand with how he played all night.

“It was a great effort by Andy.”

The Rebels got the only goal they needed a mere 46 seconds into the contest when Ben King tipped home a point shot by Joel Sexsmith.

The second period was scoreless, thanks to Anders and the Red Deer penalty killers.

“We did a lot of things well,” said Sutter. “I thought the penalties in the second took some momentum away from us, but we killed them off.

“And then it was a big goal by Mellor to get us up by two.”

Sutter was referring to Dallon Melin’s seventh of the season 7:01 into the final frame. The second-year Rebels forward stole the puck inside the Hitmen blueline, broke for the net and put a wide deke on netminder Jack McNaughton before slipping the puck just inside the post. 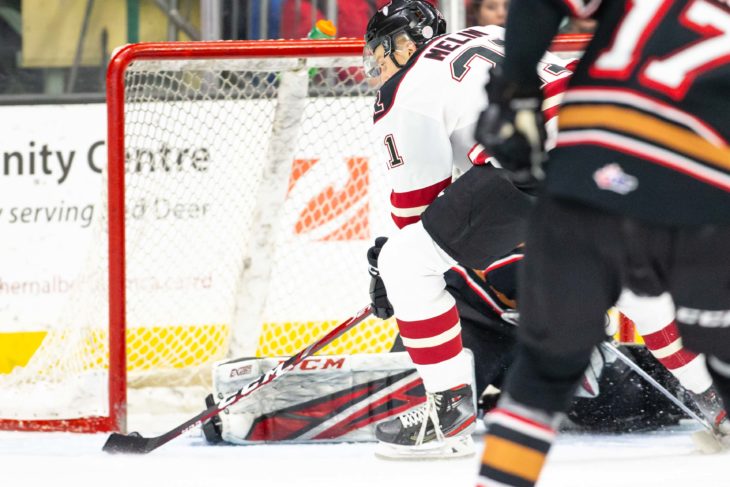 Cam Hausinger sealed the deal with just over three minutes left, handcuffing McNaughton with a sharp-angle shot from the bottom of the right circle.

The victory followed a pair of one-goal losses to Edmonton Friday and Lethbridge two days previous.

“You look at our last two games, both nights we lost in the last minute. But tonight we stayed with it and found a way,” said Sutter.

“It’s important for our confidence. When you lose those types of games like we did that can work the other way confidence-wise. It was nice to have the response tonight and play like we did, just the fact of winning.

“Every little thing we go through you hope we learn from and again experience that can help us down the road.”

The first half of the game featured plenty of nastiness — and a pair of fights — as the teams resembled true rivals. For their part, the Rebels didn’t give an inch.

“I’m not worried about that with our group,” said Sutter. “At the start of the year when you’re young like we are it’s always in the back of your mind how they’re going to respond to stuff like that.

“Right through our whole team we responded the right way and we have for some time. We’re not going to be pushed around. We have some tough kids and they play hard and compete. If they need to drop their gloves, they’ll drop their gloves.

“That’s not something I’m too concerned about anymore.”

Anders was the clear choice for first star of the game. It was his finest hour in what has been a rather difficult season for the third-year stopper, partly due to injuries.

“It’s been a tough year but one I can work on regarding my mental strength,” he said. “This game is one to work from, for sure.”

Notable: Melin and Rebels defenceman Christoffer Sedoff were selected as the game’s second and third stars . . . Rookie defenceman Kyle Masters dressed for his first home game since being injured in the World Under 17 Challenge in November. Masters’ first game back was Friday in Edmonton . . . The Rebels depart Sunday night on a five-game trip through the B.C. Division . . . Red Deer’s next home game is Feb. 22 versus the Tri-City Americans.